Dr Ian Lambie, writer of the bestselling parenting book Raising Teens Today: Dealing with sex, drugs and homework with counsellor Les Simmonds, has been working as a psychologist since 1990 with children and families, specialising mainly with kids who have lots of behaviour problems. Ian is an Associate Professor in Clinical Psychology at the University of Auckland, where he teaches forensic, child and clinical psychology. In addition to teaching at the university, Ian also has a private practice where he sees families and kids. He specialises in at-risk behaviours and sports psychology. He was involved in the TV documentary The Outsiders, which took 12 Maori kids who were out of the system and worked with them to try to turn their lives around. He has regular talks about parenting on Radio New Zealand National. Ian is a member of the Ministry of Justice Independent Advisory Group on Youth Offending chaired by Chief Youth Court Judge, Judge Becroft, and a member of the Ministry of Social Development advisory group on the treatment of conduct disorder. He is a member of the New Zealand Psychologists Board Health Practitioners Disciplinary Tribunal. In 2001 he received the New Zealand Psychological Society Public Interest Award for his longstanding community work with adolescent offenders in New Zealand. In 2006 he was awarded the Ann Ballin Award from the New Zealand Psychological Society for services to Clinical Psychology in New Zealand. In 2005 Ian was the recipient of the Faculty of Science Deans Excellence Teaching Award. In 2011 Ian received the William Friedrich Memorial Child Sexual Abuse Research and Treatment Award from the American Institute on Violence, Abuse and Trauma.
The bestselling Raising Teens Today: Dealing with sex, drugs and homework provides parents with practical ideas and information to equip them for the difficult adolescent years. Lambie and Simmonds emphasise the importance of communication, and encourage parents to work on family dynamics, building better relationships, sorting out their own issues and improving communication. They help you distinguish between normal and problem behaviours, give ways to avoid problems and negotiate difficult issues plus lots of practical ideas for dealing with common issues. The University of Auckland News described it thus: “This is not a book about theory. It focuses on information and practical ideas that parents have found useful … underpinned by the authors’ psychological and counselling expertise.’The foreword to the book was written by Andrew Becroft, New Zealand’s Principal Youth Court Judge. 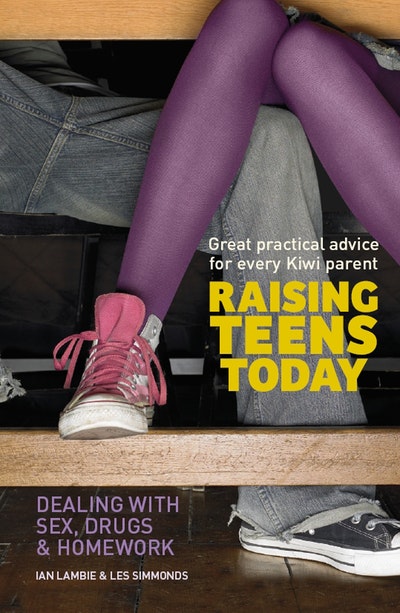