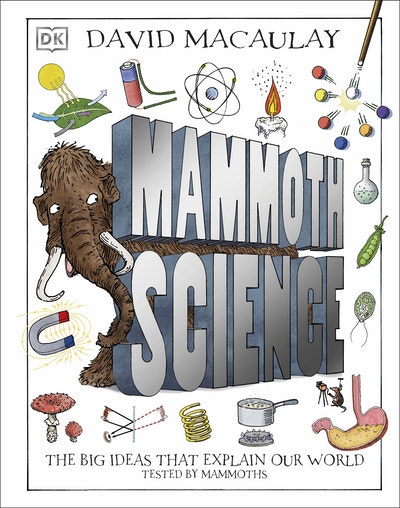 The Big Ideas That Explain Our World

An offbeat guide to science from award-winning illustrator David Macaulay

David Macaulay's troupe of curious mammoths lead you through the basics of physics, biology, and chemistry in this unconventional and highly original guide to science.From the interior of an atom to the solar system and beyond, the mammoths seek to understand the science! These intrepid science demonstrators will go to incredible lengths to educate and entertain. They wrestle with magnets to understand their powerful force, make mammoth models of different materials to explore what gives them mass, and step into an X-ray machine to reveal the bones beneath their woolly exterior. Observing and recording the mammoth's behaviour is bestselling illustrator David Macaulay, whose How Machines Work won the Royal Society Young People's Book Prize in 2016. Renowned for his ability to explain complex ideas with simple genius, Macaulay captures the oddball humour of his subject matter, making Mammoth Science the perfect introduction to scientific principles for the young and the young-at-heart.

British-American artist David Macaulay is an award-winning author and illustrator whose books have sold millions of copies in the United States alone. He has won numerous awards including the Caldecott Medal and Honor Awards, the Boston Globe-Horn Book Award, the Christopher Award, an American Institute of Architects Medal, and the Washington Post Children's Book Guild Nonfiction Award. In 2006 he received a MacArthur Fellowship. His work is renowned for its humour, detail, and ability to explain complex ideas with simple genius.