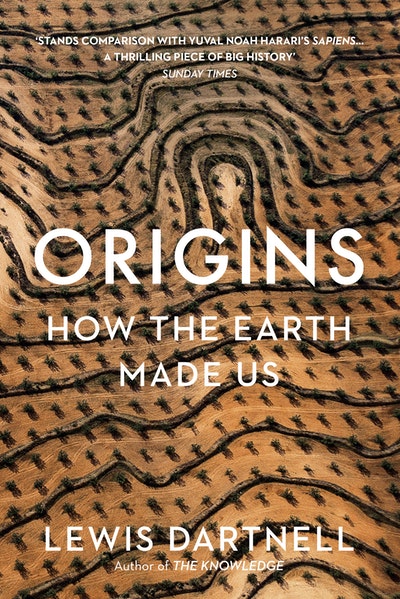 How the Earth Shaped Human History

From Sunday Times bestselling author of The Knowledge, a book that takes us far back in time to the point where history becomes science, and that unpeels the layers of this history to reveal not how we made the earth, but how the earth made us.

**SUNDAY TIMES BESTSELLER**‘Origins by Lewis Dartnell stands comparison with Yuval Noah Harari’s Sapiens…A thrilling piece of Big History’ Sunday Times'A sweeping, brilliant overview of the history not only of our species but of the world' Peter Frankopan, author of The Silk RoadsWhen we talk about human history, we focus on great leaders, mass migration and decisive wars. But how has the Earth itself determined our destiny? How has our planet made us?

As a species we are shaped by our environment. Geological forces drove our evolution in East Africa; mountainous terrain led to the development of democracy in Greece; and today voting behaviour in the United States follows the bed of an ancient sea. The human story is the story of these forces, from plate tectonics and climate change, to atmospheric circulation and ocean currents.

How are the Himalayas linked to the orbit of the Earth, and to the formation of the British Isles? By taking us billions of years into our planet’s past, Professor Lewis Dartnell tells us the ultimate origin story. When we reach the point where history becomes science we see a vast web of connections that underwrites our modern world and helps us face the challenges of the future.From the cultivation of the first crops to the founding of modern states, Origins reveals the Earth’s awesome impact on the shape of human civilizations.

Lewis Dartnell is an astrobiology researcher and professor at the University of Westminster. He has won several awards for his science writing, and contributes to the Guardian, The Times and New Scientist. He has also written for television and appeared on Horizon, Sky News, and Wonders of the Universe, as well as National Geographic and History channels. A tireless populariser of science, his previous books include the bestselling The Knowledge: How to Rebuild Our World from Scratch. 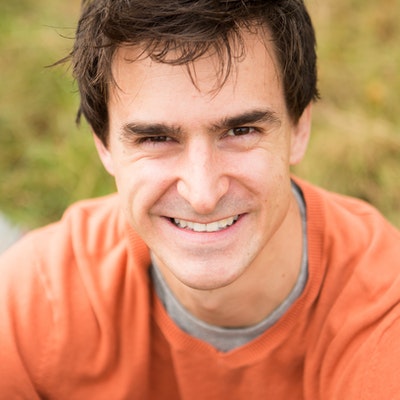 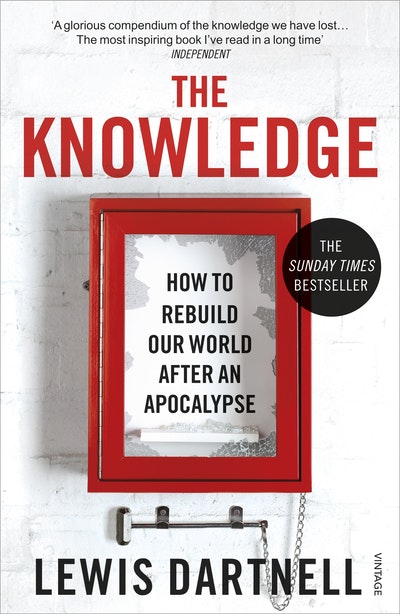 An original and timely way of looking at human history through the materials and natural resources that our species has employed to such effect. It should be read by everyone who ponders how long exploitation can continue on a finite planet.

A sweeping, brilliant overview of the history of not only of our species but of the world. Whether discussing the formation of continents or the role that climate (and climate change) has had on human migration, Lewis Dartnell has a rare talent in being able to see the big picture – and explaining why it matters.

Endlessly enthralling, Lewis Dartnell explains why the history of humanity, and of human cultures, both take dictation from the deeper history of Earth herself - from broad generalities to surprisingly specific details. An entertaining and informative essay on contingency - and worthy successor to the writing of Stephen Jay Gould.

‘Extraordinary… Origins is one of those rare books that dissolves mystery through the steady application of sublime lucidity. While reading it, I kept thinking: “Oh, that makes sense…” … Dartnell understands geology, geography, anthropology, physics, chemistry, biology, astronomy and history. That’s quite an achievement, but what makes him special is the way he communicates the interconnectedness of these disciplines in a clear, logical and entertaining way…Superb.

Dartnell has found the perfect blend of science and history. This is a book that will not only challenge our preconceptions about the past, but should make us think very carefully about humanity’s future

What a treat to see history through the eyes of an astrobiologist! Our history was shaped profoundly by the laying down of iron beds two billion years ago, by the tectonic forces that ripped open the African rift valley, by the slow cooling of the earth that began 50 million years ago, and by the evolution of grasses! Lewis Dartnell’s absorbing new book shows, with many vivid examples, how deeply human history is embedded in the history of planet earth

Dartnell has an easy, light touch that mixes well with his considerable knowledge. The result is a first-class read – and an important one

Dartnell is an eloquent, conversational guide to these daunting aeons of time

Origins’ strength lies in the way it manages to conjure a tight, linear narrative from what would otherwise be an overwhelming wealth of insights, a feat aided by Dartnell’s soothing, conversational writing style… a captivating and enriching read, with as much to recommend it to those with an interest in geophysics as to students of human history and civilization.

Origins is like a well-crafted jigsaw puzzle. Each piece fits together beautifully to build up a complete picture of the deep connections we have to the blue marble we call home… a thoroughly satisfying read for anyone interested in how our planet drove our history, and how everything is connected

Jenny Winder, BBC Sky at Night, *Book of the Month*

A thrilling slice of big history and as good as Harari

Enthusiastic and brimful of facts… Dartnell’s great achievement is that while he crams in a great deal, the reader doesn’t feel rushed. It moves from the dawn of agriculture, to ancient Mesopotamian merchants to the coal-fields of England without a bump

Instead of looking at what we have done to the Earth, he examines what it has done to us, interweaving the physical and social sciences in a clear, logical and joyously entertaining way… [a] wonderful book

Gerard DeGroot, The Times, *Books of the Year*