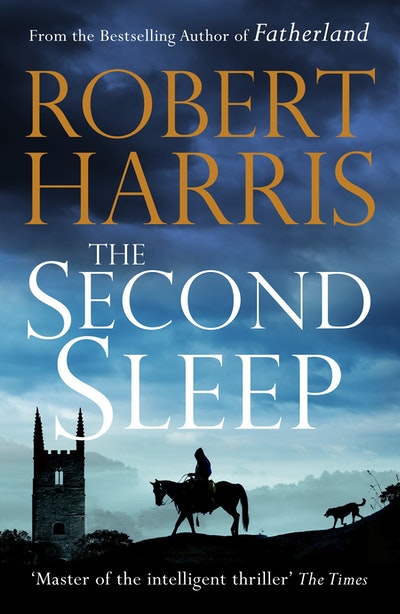 Late on the afternoon of Tuesday the ninth of April in the Year of Our Risen Lord 1468, a solitary traveller was to be observed picking his way on horseback across the wild moorland of that ancient region of south-western England known since Saxon times as Wessex. If this young man’s expression was troubled, we may grant he had good cause. More than an hour had elapsed since he had last seen a living soul. Soon it would be dusk, and if he was caught out of doors after curfew he risked a night in jail.

He had stopped to ask directions in the market town of Axford, where a group of rough-looking fellows had been drinking outside an inn beneath the painted sign of a swan. After grinning between themselves at the strangeness of his accent, and imitating the refinement of his yeses and yous, they had assured him that to reach his destination all he needed to do was to ride straight towards the setting sun. But now he was beginning to suspect this might have been another piece of local mischief. For no sooner had he passed the high walls of the town’s prison, where three executed felons hung rotting from their gibbets, and crossed the river and entered open country, than heavy clouds had blown across the western sky, obliterating the sunset. Behind him the tall spire of Axford’s church had long since submerged below the horizon. Ahead, the road twisted and dipped between unpopulated ridges of dark woodland and stretches of wild heath daubed with streaks of yellow gorse before dwindling into the murk.

Presently, in the way that often in those parts signals a change in the weather, it became very still. All the birds went quiet, even the huge red kites with their incongruous high-pitched cries that had pursued him for miles. Chilly veils of sodden grey mist drifted across the moor and draped themselves around him, and for the first time since he set off early that morning, he felt moved to pray aloud for protection to his name saint, who had borne the infant Christ on his back across the river.

After a while, the road began to ascend a wooded hillside. As it climbed, so it dwindled, until it was little better than a cart track  – ridged brown earth covered loosely by stones, shards of soft blue slate and yellow gravel braided by the running rainwater. From the steep banks on either side rose the scent of wild herbs – lungwort, lemon balm, mustard garlic – while the overhanging branches drooped so low he had to duck and fend them off with his arm, dislodging further showers of fresh cold water that drenched his head and trickled down his sleeve. Something shrieked and flashed emerald in the gloom, and his heart seemed to jump halfway up his throat, even though he realised almost at once that it was nothing more sinister than a common parakeet. He shut his eyes in relief.

When he opened them again, he saw a brownish object up ahead. At first he mistook it for a fallen tree. He wiped his sleeve across his face and leaned forward in his saddle. A figure in a hessian smock, cowled like a monk, was pushing a handcart. He dug his knees into the flanks of his mount and urged her on. ‘God be with you!’ he shouted down at the curious apparition. ‘I am a stranger here.’

The figure pushed ahead even harder, pretending not to have heard, so that he was obliged to pass it once again. This time he wheeled around to block the narrow lane. He noticed the cart was piled with wool bales. He loosened the neck strings of his cape. ‘I mean you no harm. Christopher Fairfax is my name.’ He pulled down the wet fabric and lifted his beard to show the white cloth tied around his neck. ‘I am a man of God.’

A damp thin male face squinted up at him through the rain. Slowly and reluctantly the hood was drawn back to reveal a head entirely bald. Water ran off the shiny dome, upon the crown of which curved a blood-coloured crescent-shaped birthmark.

‘Is this the road to Addicott St George?’

The man scratched at his birthmark and screwed up his eyes as if making a great effort of memory. Eventually he said, ‘Ye means Adcut?’

‘No. There’s a fork, a half-mile back. Ye needs t’take t’other.’ The man looked him up and down. A knowing expression crept across his face – a slow, rural slyness, as if he were measuring a beast at market. ‘Ye’re young for the work.’

‘And yet old enough, I think!’ Fairfax forced a smile and bowed. ‘Peace be upon you.’

He tugged at the bridle and turned his elderly grey mare around, riding her carefully back down the watery track until he found the place where the road forked. It was almost impossible to spot unless one had been warned to look for it. So those wretches in Axford had indeed been trying to get him lost – a trick they’d never have dared attempt had they known he was a priest. He ought to tell the local sheriffs. Yes, on his way home he would do exactly that. He would bring the whole weight of the law down upon their stupid rustic numbskulls – imprisonment, a fine, a day in the stocks being pelted by stones and shit . . .

This second track was even steeper. Ancient trees on either side, already in full leaf, leaned in no more than a couple of yards above his head as if to confer. Their entwined branches shut out the light. Inside this dank tunnel night seemed already to have fallen. His horse skittered and refused to carry him further. He wrapped his arms around her neck and whispered in her ear, ‘Come on, May!’ But she was a grumpy beast, stubborn with age, more mule than horse, and in the end he had to dismount and lead her.

On foot, he felt even more vulnerable. He had twenty pounds in his purse for expenses, counted out a coin at a time by the Dean the previous evening, and many were the travellers who had been murdered for half as much. His boots slithered in the mud as he dragged at the bridle. Oh, but this was a fine joke, he thought bitterly. The bishop might rarely smile, but that did not mean he entirely lacked a certain sense of humour. To send a man off thirty miles, to the furthest edge of the diocese, on such an errand, and on a clapped-out horse . . .

He pictured his colleagues gathering for their customary early supper – seated on the long benches in the chapter house in front of the huge fire, the bishop bowing his narrow grizzled head to say grace, his face in the blaze still the colour of an oyster, a flicker of malicious merriment in those small dark eyes. ‘And lastly we pray for our brother in Christ, Christopher Fairfax, serving our holy mother the Church tonight . . . in a far-off land!’

Some wretched nearby brook seemed to gurgle with laughter.

But then, just as he was despairing, a pale glow appeared at the end of the overgrown lane and after a few more minutes of weary dragging, he emerged into what was left of the day’s light to discover himself on the crest of a hill. To his right the land fell away sharply. Small fields with low dry-stone walls enclosed a scattering of cows, sheep and goats. Ramshackle wooden stalls had been weathered by the winter to the colour of pewter. At the bottom of the valley, about a mile distant, was a river with a bridge. Next to it, a small settlement of mostly thatched roofs was centred around a square stone church tower. Here and there, feathery lines of white-grey smoke rose and bled into the darker grey of the sky. The clouds above the enclosing hills were low and racing, like waves fleeing a storm out at sea. It had stopped raining. He fancied he could smell the chimneys. He imagined light, warmth, company, food. In the wet fresh evening air his spirits revived. Even May’s mood improved sufficiently that she consented to let him remount her.

It was nearly dark by the time they trotted into the centre of the village. May’s shod hooves clattered over the arched stone bridge that spanned the river and splashed along the muddy narrow street. His high vantage point enabled him to peer into the whitewashed cottages on either side. Some had small front gardens with white wooden fences. Most opened directly on to the road. In a couple of windows, candles glowed; in one, he glimpsed the full pale moon of a face, quickly eclipsed by a curtain. He halted at the lychgate and looked about him. A cobbled path led through the graveyard to the portico of a church that he guessed must have stood square on this land for at least a thousand years; more likely fifteen hundred. Wrapped around the middle of the flagpole on the top of the tower, the red and white standard of England and St George hung damply at half-mast.

On the far side of the graveyard, beyond the wall, was a tumbling two-storey building with a thatched roof. On the threshold, now that he looked more closely, he could just make out the gaunt figure of a woman dressed in black, holding a lantern, watching him. For a few moments they regarded one another across the lichened tombstones. Then she lifted the light a little and moved it back and forth. He raised his hand, spurred the mare and rode around the perimeter of the churchyard towards the waiting figure.

The gripping new thriller from the bestselling author of Munich, An Officer and A Spy and Fatherland