What almost dying taught me about living

Suleika's story of cancer survival is for anyone whose life has been interrupted by illness or tragedy and knows there's no going back to their old life but doesn't yet know what their new life will be like.

At just twenty-two, as her friends were setting out on the path to adulthood, Suleika Jaouad was diagnosed with leukemia. For the next five years, her world comprised four white walls, a hospital bed, fluorescent lights and tubes and wires connecting her to an IV pole. Her dreams of becoming a war correspondent were replaced by a battle for her own life.

At the age of twenty-seven, and celebrating her first year of remission, Suleika embarked on an epic road trip, her only companion her three-year-old Schnoodle, Oscar - a certified service dog who had played a huge part in her recovery. Starting in New York City, the roadmap was determined by the home addresses of the people she wanted to visit along the way - some of the many strangers who had responded to her New York Times columns and films, 'Life, Interrupted', and whose own deeply personal stories of surviving illness and tragedy had sustained Suleika during her years of treatment.

Between Two Kingdoms is a chronicle of survivorship and beginning anew. Illuminating some of the universal questions about how we live, mourn, heal and grow up, this twist on the classic American road trip is an inspiring and empowering exploration of what it means to survive.

Suleika Jaouad is an Emmy Award-winning writer, speaker, cancer survivor and activist. She served on Barack Obama's Cancer Panel and her advocacy work, reporting and speaking has been featured at the United Nations, on Capitol Hill and on the TED Talk main stage. When she's not on the road with her 1972 Volkswagen camper van and her rescue dog Oscar, she lives in Brooklyn. 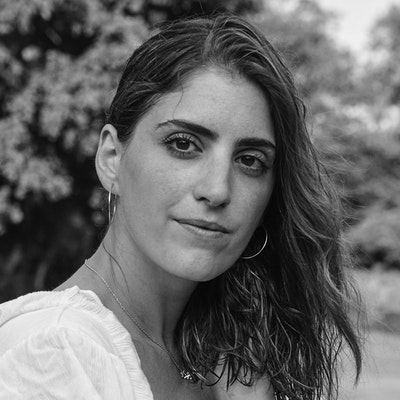 Praise for Between Two Kingdoms

When the life we had is snatched away, how do we find the conviction to live another? Between Two Kingdoms will resonate with anyone who is living a different life than they planned to live. This is a propulsive, soulful story of mourning and gratitude – and an intimate portrait of one woman’s sojourn in the wilderness between life and death.

A masterpiece that upends the expected structure of memoirs about illness to show us what happens after the body recovers, the courage and creativity necessary to forge a transformed selfhood. Suleika Jaouad's sentences are as urgent and beautiful as the story they comprise. Between Two Kingdoms is a stunning debut by a powerful new voice and required reading for every kind of survivor.