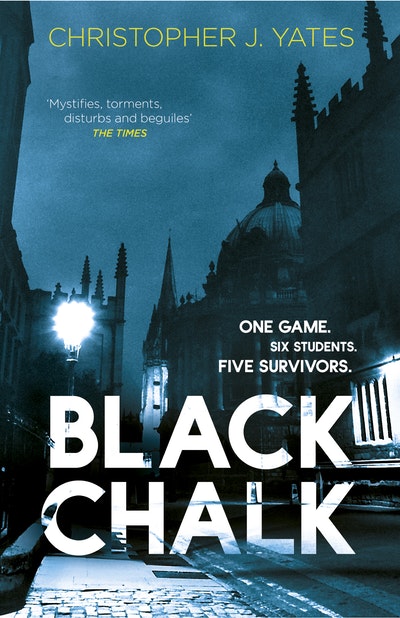 A compulsively readable psychological thriller set in New York and at Oxford University, in which a group of six students play an elaborate game of dares and consequences - with tragic results

One game. Six students. Five survivors.It was only ever meant to be a game.

A game of consequences, of silly forfeits, childish dares. A game to be played by six best friends in their first year at Oxford University. But then the game changed: the stakes grew higher and the dares more personal, more humiliating, finally evolving into a vicious struggle with unpredictable and tragic results.

Now, fourteen years later, the remaining players must meet again for the final round.

Christopher J. Yates studied law at Wadham College, Oxford from 1990-93 and initially pursued a career in law before he began working in puzzles, representing the UK at the World Puzzle Championships. Since then he has worked as a freelance journalist, sub-editor and puzzles editor/compiler. In 2007 he moved to New York City with his wife, and currently lives in the East Village.

Sinister, addictive and unpredictable – this is a novel to be devoured greedily, at speed, but one that will leave its footprint on your memory for far longer

Yates’s take on the collegiate thriller lives up to early comparisons to Donna Tartt’s The Secret History... filled with gleeful malevolence

[A] chilling debut...this is a thriller, a cautionary tale and a sobering exploration of unintended consequences rolled into one

A truly chilling thriller, with campus-fun-gone-wrong echoes of Donna Tartt's The Secret History

A very exciting debut - like The Secret History, but so much creepier... This is intellectually challenging psychological thriller writing at a high level

An intricate and sinister thriller, in which the truth is slowly and subtly revealed

Words to describe this wonderful thriller could be: gripping, sinister, realistic and very scary, as well as irresistible, compulsive and unputdownable... A perfect read on a dark evening,

A gripping thriller... Will leave even the most hardened of horror fans looking over their shoulders and checking that the door is locked!

a sinister and suspenseful read