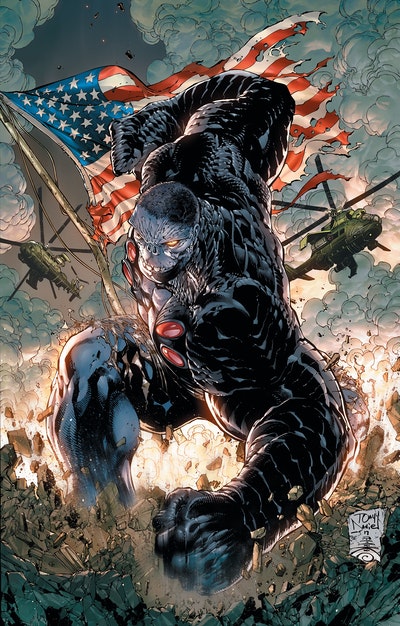 Damage Vol. 1 Out Of Control (New Age Of Heroes)

Spinning out of Scott Snyder and Greg Capullo's Dark Night: Metal epic comes Damage, the tale of a young boy trapped in the body of a monster!

Ethan "Elvis" Avery just wanted to serve his country. Instead, he's been changed into a monster!

Tasked as the government's own living, breathing, ticking time bomb, Ethan retains no control when the monster takes over. Cheaper than a nuclear warhead and twice as effective, Ethan fights to rein in the damage he unleashes when the beast inside him springs free for one hour a day. His first challenge? The Suicide Squad.

From artist Tony S. Daniel (Batman, Justice League) and writer Robert Venditti (Green Lantern), Damage emerges as one of the flagship titles of the New Age of Heroes! Collects issues #1-6.

The DC Universe just got bigger! In the New Age of Heroes, DC introduces a bold new line of comics starring a thrilling array of heroes--some you know, some you may have glimpsed in the pages of Dark Nights: Metal. They embody a spirit of epic, adventurous bravery--the kind you may remember from another era, but updated in an exciting way for today. Illustrated by DC's Master Class of artists, including legendary names like Jim Lee, Andy Kubert, John Romita Jr., Ivan Reis, Tony S. Daniel and others, these new series are great entry points for new readers and a welcome addition for longtime fans of the DC library.

The Grot: The Story of the Swamp City Grifters
Pat Grant