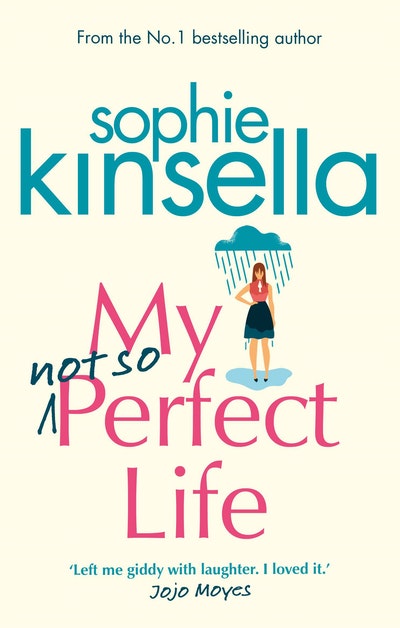 My Not So Perfect Life

First: it could be worse. As commutes go, it could be a lot worse, and I must keep remembering this. Second: it’s worth it. I want to live in London; I want to do this; and commuting is part of the deal. It’s part of the London experience, like Tate Modern.

(Actually, it’s not much like Tate Modern. Bad example.)

Anyway, my twenty-minute walk to the station is fine. Enjoyable, even. The grey December air is like iron in my chest, but I feel good. The day’s begun. I’m on my way.

My coat’s pretty warm, even though it cost £9.99 and came from the market. It had a label in it, ‘Christin Bior’, but I cut it out as soon as I got home. You can’t work where I work and have ‘Christin Bior’ in your coat. You could have a genuine vintage Christian Dior label. Or something Japanese. Or maybe no label because you make your clothes yourself out of retro fabrics that you source at Alfies Antiques.

But not ‘Christin Bior’.

It’s as I get near to Catford Bridge that I start to feel a knot of tension. I really don’t want to be late today. My boss has started throwing all sorts of hissy fits about people ‘swanning in at all times’, so I left an extra twenty minutes early, in case it was a bad day.

I can already see: it’s a God-awful day.

They’ve been having a lot of problems on our line recently, and keep cancelling trains with no warning. Trouble is, in London rush hour, you can’t just cancel trains. What are all the people who were planning to get on that train supposed to do? Evaporate?

As I pass through the ticket barrier I can already see the answer. They’re crowded on the platform, squinting up at the information screen, jostling for position, peering down the line, scowling at each other and ignoring each other, all at the same time.

Oh God. They must have cancelled at least two trains, because this looks like three trainloads of people, all waiting for the next one, clustered near the edge of the platform at strategic points. It’s mid-December, but there’s no Christmas spirit here. Everyone’s too tense and cold and Monday­morning-ish. The only festive touch consists of a few miserable-looking fairy lights and a series of warning an­nouncements about holiday transport.

Screwing up my nerve, I join the throng, and exhale in relief as a train pulls into the station. Not that I’ll get on this train. (Get on the first train? That would be ridiculous.) There are people squashed up against the steamy windows, and as the doors slide open, only one woman gets off, looking pretty crumpled as she tries to extricate herself.

But even so, the crowd surges forward, and somehow a load of people insert themselves inside the train and it pulls away, and I’m that much further forward on the platform. Now I just have to keep my place and not let that scrawny guy with gelled hair edge in front of me. I’ve taken out my ear­buds so I can listen for announcements, and stay poised and vigilant.

Commuting in London is basically warfare. It’s a constant campaign of claiming territory, inching forward, never relax­ing for a moment. Because if you do, someone will step past you. Or step on you.

Exactly eleven minutes later, the next train pulls in. I head forward with the crowd, trying to block out the soundtrack of angry exclamations: ‘Can you move down?’ ‘There’s room inside!’ ‘They just need to move down!’

I’ve noticed that people inside trains have completely different expressions from people on platforms – especially the ones who have managed to get a seat. They’re the ones who got over the mountains to Switzerland. They won’t even look up. They maintain this guilty, defiant refusal to engage: I know you’re out there, I know it’s awful and I’m safe inside, but I suffered too, so let me just read my Kindle without bloody guilt-tripping me, OK?

People are pushing and pushing, and someone’s actually shoving me – I can feel fingers on my back – and suddenly I’m stepping on to the train floor. Now I need to grab on to a pole or a handle – anything – and use it as leverage. Once your foot’s on the train, you’re in.

A man way behind me seems very angry – I can hear extra-loud shouting and cursing. And suddenly there’s a groundswell, like a tsunami of people. I’ve only exper­ienced this a couple of times, and it’s terrifying. I’m being pushed forward without even touching the ground, and as the train doors close I end up squeezed between two guys – one in a suit and one in a tracksuit – and a girl eating a panini.

We’re so tightly wedged that she’s holding her panini about three inches away from my face. Every time she takes a bite, I get a waft of pesto. But I studiously ignore it. And the girl. And the men. Even though I can feel the tracksuit guy’s warm thigh against mine and count the stubbly hairs on his neck. As the train starts moving we’re constantly bumped against each other, but no one even makes eye contact. I think if you make eye contact on the Tube, they call the police or some­thing.

To distract myself, I try to plan the rest of my journey. When I get to Waterloo East, I’ll check out which Tube line is running best. I can do Jubilee–District (takes ages) or Jubilee–Central (longer walk at the other end) or Overground (even longer walk the other end).

And yes, if I’d known I was going to end up working in Chiswick, I wouldn’t have chosen to rent in Catford. But when I first came to London, it was to do an internship in east London. (They called it ‘Shoreditch’ in the ad. It so wasn’t Shoreditch.) Catford was cheap and it wasn’t too far, and now I just can’t face west London prices, and the commute’s not that bad—

‘Aargh!’ I shriek as the train jolts and I’m thrown violently forward. The girl has been thrown too, and her hand shoots up towards my face and suddenly, before I know it, my open mouth has landed on the end of her panini.

I’m so shocked, I can’t react. My mouth is full of warm, doughy bread and melted mozzarella. How did this even happen?

Instinctively my teeth clench shut, a move I immediately regret. Although . . . what else was I supposed to do? Nervously, I raise my eyes to hers, my mouth still full.

‘What the fuck?’ The girl addresses the carriage incredu­lously. ‘She’s stealing my breakfast!’

My head’s sweating with stress. This is bad. Bad. What do I do now? Bite off the panini? (Not good.) Just let it fall out of my mouth? (Even worse. Urgh.) There’s no good way out of this situation, none.

At last, I bite fully through the panini, my face burning with embarrassment. Now I have to chew my way through a mouthful of someone else’s claggy bread, with everyone watching.

‘I’m really sorry,’ I say awkwardly to the girl as soon as I’ve managed to swallow. ‘I hope you enjoy the rest.’

‘You fell on it,’ she echoes, so sceptically that I stare at her.

‘Who knows?’ She puts a protective hand around the rest of her panini, as though I might suddenly launch myself at her and bite another chunk off. ‘All kinds of weird people in London.’

‘You can “fall” on me any time, love,’ puts in the guy in the tracksuit with a smirk. ‘Only don’t chew,’ he adds, and laughter comes from all around the carriage.

My face flames even redder, but I’m not going to react. In fact, this conversation is over.

For the next fifteen minutes I gaze sternly ahead, trying to exist in my own little bubble. At Waterloo East, we all dis­gorge from the train, and I breathe in the cold, fumey air with relief. I stride as quickly as I can to the Underground, opt for Jubilee–District, and join the crowd on the platform. As I do so, I glance at my watch and quell a sigh. I’ve been travelling for forty-?ve minutes already, and I’m not even nearly there.

‘Move down! Will you move DOWN?’ A man beside me on the platform is yelling so loudly, I flinch. The train has arrived and there’s the usual battle between the people inside the carriage, who think it’s totally crammed, and the people outside, who are measuring the empty spaces with forensic, practised eyes and reckon you could fit another twenty people in, easy.

Finally I get on the Tube, and fight my way off at Westminster, and wait for the District line, and then chug along to Turnham Green. As I get out of the Tube station, I glance at my watch and start running. Shit. I barely have ten minutes.

‘Wait!’ An imperious voice makes me freeze. Across the lobby is striding a familiar figure. She has long legs, high-heeled boots, expensive highlights, a biker jacket and a short skirt in an orange textured fabric which makes every other garment in the lift look suddenly old and obvious. Especially my black jersey skirt, £8.99 from the market.

‘Horrendous journey,’ she says as she gets into the lift. Her voice is husky, coppery, grown-up-sounding. It’s a voice that knows stuff; that doesn’t have time for fools. She jabs the floor number with a manicured finger and we start to rise. ‘Absolutely horrendous,’ she reiterates. ‘The lights would not change at the Chiswick Lane junction. It took me twenty-five minutes to get here from home. Twenty-five minutes!’

She gives me one of her swooping, eagle-like gazes, and I realize she’s waiting for a response.

The lift doors open and she marches out. A moment later I follow, watching her haircut fall perfectly back into shape with every step and breathing in that distinctive scent she wears (bespoke, created for her at Annick Goutal in Paris on her fifth-wedding-anniversary trip).

This is my boss. This is Demeter. The woman with the perfect life. 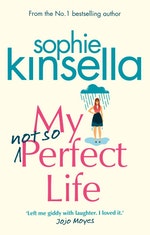 My Not So Perfect Life Sophie Kinsella