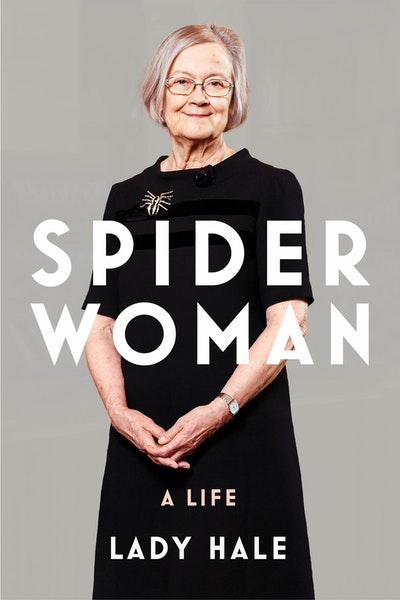 A Life - by the former President of the Supreme Court

Spider Woman is Lady Hale's journey from in a little village in North Yorkshire to become the most senior Judge in the United Kingdom, against all odds; it is the story of a pioneer and a living-legend

Lady Hale has been an inspirational figure to many people for years - for her achievements in the law, for the causes she has championed, and for her passionate views on access to the law as a profession.

She is the former President of the Supreme Court and came to national prominence due to her historic and dramatic role in determining the 2019 prorogation of Parliament to be unlawful.

Called to the Bar in 1969, she spent almost twenty years in academia alongside working as a part-time barrister. In 1984, she became the first woman and the youngest person to be appointed to the Law Commission. During her nine years there, she would oversee critical reforms in family law. She was appointed Deputy President of the Supreme Court in 2013, and served as President from 2017 to 2020.

She has described Spider Woman as 'the story of how a little girl from a little school in a little village in North Yorkshire became the most senior Judge in the United Kingdom - when all the previous holders had been men from public school backgrounds with stellar careers as barristers. It is the story of how she found that she could cope. And it shows how other women and people from similarly small beginnings, without any connections or obvious advantages, will find that they can cope too.'

Brenda Hale is a superhero who embodies Parker's law that great power brings equivalent responsibility. Her wise, accessible memoir is essential, entertaining and inspirational reading for all lovers of freedom, equality and justice

A feminist icon... Her success story is an inspiration for men and women both - showing that law matters

Brenda Hale's story is extraordinary. She has been a pioneer as a woman... Spider woman and agent of change

Lady Hale takes us on the journey from 'girly swot' to 'Spider Woman' and along the way teaches us about the importance of the rule of law and protecting human rights... with humanity, humour and deep insight

What a life, what a story... Spider Woman is restrained, warm, dryly funny ... and an inspiration to all women to aim high... Whatever her title, Brenda Hale rocks

Fluently written... Her accounts of her more groundbreaking cases are fascinating... [Spider Woman is] quietly thrilling