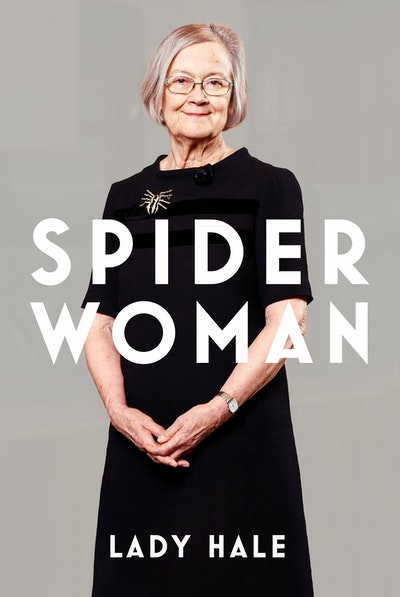 A Life - by the former President of the Supreme Court

Spider Woman describes Lady Hale's unlikely journey from a little village in North Yorkshire to become the most senior judge in the United Kingdom; it is the story of a pioneer, a reformer, and a living legend

'Brenda Hale's story is extraordinary. She has been a pioneer... Spider woman and agent of change' Harriet Harman

Lady Hale is an inspirational figure admired for her historic achievements and for the causes she has championed. Spider Woman is her story.

As President of the Supreme Court, Lady Hale won global attention in finding the 2019 prorogation of Parliament to be unlawful. Yet that dramatic moment was merely the pinnacle of a career throughout which she was hailed as a pioneering reformer.

As 'a little girl from a little school in a little village in North Yorkshire', she only went into the law because her headteacher told her she wasn't clever enough to study history. She became the most senior judge in the country but it was an unconventional path to the top.

How does a self-professed 'girly swot' get ahead in a profession dominated by men? Was it a surprise that the perspectives of women and other disadvantaged groups had been overlooked, or that children's interests were marginalised? A lifelong smasher of glass-ceilings, who took as her motto 'women are equal to everything', her landmark rulings in areas including domestic violence, divorce, mental health and equality were her attempt to correct that.

Wise, warm and inspiring, Spider Woman shows how the law shapes our world and supports us in crisis. It is the story of how Lady Hale found that she could overcome the odds, which shows that anyone from similar beginnings will find that they can cope too.

Brenda Hale is a superhero who embodies Parker's law that great power brings equivalent responsibility. Her wise, accessible memoir is essential, entertaining and inspirational reading for all lovers of freedom, equality and justice

A feminist icon... Her success story is an inspiration for men and women both - showing that law matters

Brenda Hale's story is extraordinary. She has been a pioneer as a woman... Spider woman and agent of change

Lady Hale takes us on the journey from 'girly swot' to 'Spider Woman' and along the way teaches us about the importance of the rule of law and protecting human rights... with humanity, humour and deep insight

What a life, what a story... Spider Woman is restrained, warm, dryly funny ... and an inspiration to all women to aim high... Whatever her title, Brenda Hale rocks

Fluently written... Her accounts of her more groundbreaking cases are fascinating... [Spider Woman is] quietly thrilling