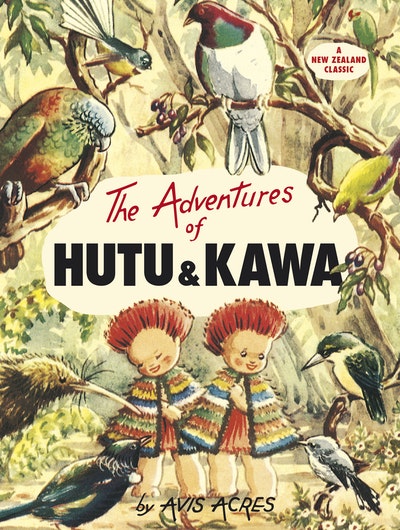 The Adventures of Hutu and Kawa

The Adventures of Hutu and Kawa, a bestselling classic children's book from the 1950s by New Zealand artist Avis Acres, is reissued by popular demand in a gorgeous hardback gift edition.

The Adventures of Hutu and Kawa, a bestselling classic children's book from the 1950s by New Zealand artist Avis Acres, is reissued by popular demand in a gorgeous hardback gift edition.

In an old pohutukawa tree between the forest and the sea live two tiny Pohutukawa Babies, Hutu and Kawa.
With the help of Grandpa Kiwi, Hutu and Kawa build a canoe and set off up the river to explore the forest. On their way they make many new friends – and encounter the fearsome Bush Hawk.

During the 1950s children enjoyed the adventures of the Pohutukawa Babies in the New Zealand Herald each week, and Avis Acres' books, with beautiful watercolour illustrations showcasing native flora and wildlife, became bestsellers.

The Adventures of Hutu and Kawa is the first tale in the classic series. This 60th-anniversary hardback edition captures all the charm of the original tale and brings these delightful characters to a new generation of children.

Avis Acres (1910–1994) was a New Zealand artist, writer and illustrator who, during the 1950s, produced a number of popular children's picture books. Of these, her three Hutu and Kawa stories with their distinctive and beautiful illustrations of the native forest and its inhabitants, are the most well-known and beloved.

Avis was born in Wellington in 1910 and was the eldest of four siblings. The family moved to Auckland when Avis was three years old, and the homes she grew up in always had beautiful gardens that she credited with inspiring her lifelong interest in nature.

Though she was an able student, in her early teens Avis had to leave school to work and contribute to the household income. She then held a variety of jobs, all of which made the most of her interest in art and writing, and wrote columns and illustrated various comic series for local newspapers. She also took drawing classes at night school.

In 1935 Avis married Bob Acres. They moved to Hamilton and Avis started exhibiting and selling her paintings.

In 1950 she and Bob moved to Taupo, where Avis first dreamed up the characters of Hutu and Kawa. The Pohutukawa Babies were modelled on a book published three decades earlier, Gumnut Babies by Australian writer and artist May Gibbs. Avis was soon writing a highly popular children's comic strip, 'The Tale of Hutu and Kawa', which appeared weekly in the New Zealand Herald. It featured the escapades of the Pohutukawa Babies and their bush friends, and each instalment ended with the phrase 'To be continued'. Three picture books about Hutu and Kawa followed — The Adventures of Hutu and Kawa (1955), Hutu and Kawa meet Tuatara (1956) and Hutu and Kawa find an Island (1957) — published by A. H. and A. W. Reed. All three stories were well ahead of their time with their interest in and concern for the fragile natural environment. In Avis Acres' entry in the Dictionary of New Zealand Biography, Jill Holt writes, 'Despite their fantasy, the Hutu and Kawa books conveyed an understanding of ecology and a strong conservationist ethos. In Hutu and Kawa find an Island, Acres described the terrible impact of the possum on native trees and birds. In the same book she incorporated traditional Maori knowledge on making the sail for a canoe. To ensure that the details in her books were accurate, she undertook research in museums and libraries, and in the field.'

While living in Taupo, Avis produced another highly successful and now classic tale, Opo the Gay Dolphin (1956), about the friendly bottlenosed dolphin who played with local swimmers at Opononi, as well as a series of children's nature books.

In later years, Avis's articles and illustrations about plants and wildlife were regularly published in newspapers and journals, and she continued to paint and study nature. She and Bob moved to Levin, then to Te Horo and finally to Tauranga, where they lived out their retirement.

Avis Acres died in 1994. Her artwork continues to be appreciated both for its nostalgic charm and for the beauty of its natural detail.