The Girl on the Train

There is a pile of clothing on the side of the train tracks. Light-blue cloth – a shirt, perhaps – jumbled up with something dirty white. It’s probably rubbish, part of a load fly-tipped into the scrubby little wood up the bank. It could have been left behind by the engineers who work this part of the track, they’re here often enough. Or it could be something else.

My mother used to tell me that I had an overactive imagination; Tom said that too. I can’t help it, I catch sight of these discarded scraps, a dirty T-shirt or a lonesome shoe, and all I can think of is the other shoe, and the feet that fitted into them.

The train jolts and scrapes and screeches back into motion, the little pile of clothes disappears from view and we trundle on towards London, moving at a brisk jogger’s pace. Someone in the seat behind me gives a sigh of helpless irritation; the 8.04 slow train from Ashbury to Euston can test the patience of the most seasoned commuter. The journey is supposed to take fifty-four minutes, but it rarely does: this section of the track is ancient, decrepit, beset with signalling problems and never-ending engineering works.

The train crawls along; it judders past warehouses and water towers, bridges and sheds, past modest Victorian houses, their backs turned squarely to the track.

My head leaning against the carriage window, I watch these houses roll past me like a tracking shot in a film. I see them as others do not; even their owners probably don’t see them from this perspective. Twice a day, I am offered a view into other lives, just for a moment. There’s something comforting about the sight of strangers safe at home.

Someone’s phone is ringing, an incongruously joyful and upbeat song. They’re slow to answer, it jingles on and on around me. I can feel my fellow commuters shift in their seats, rustle their newspapers, tap at their computers. The train lurches and sways around the bend, slowing as it approaches a red signal. I try not to look up, I try to read the free newspaper I was handed on my way into the station, but the words blur in front of my eyes, nothing holds my interest. In my head I can still see that little pile of clothes lying at the edge of the track, abandoned.

The pre-mixed gin and tonic fizzes up over the lip of the can as I bring it to my mouth and sip. Tangy and cold, the taste of my first ever holiday with Tom, a fishing village on the Basque coast in 2005. In the mornings we’d swim the half-mile to the little island in the bay, make love on secret hidden beaches; in the afternoons we’d sit at a bar drinking strong, bitter gin and tonics, watching swarms of beach footballers playing chaotic 25-a-side games on the low-tide sands.

I take another sip, and another; the can’s already half empty but it’s OK, I have three more in the plastic bag at my feet. It’s Friday, so I don’t have to feel guilty about drinking on the train. TGIF. The fun starts here.

It’s going to be a lovely weekend, that’s what they’re telling us. Beautiful sunshine, cloudless skies. In the old days we might have driven to Corly Wood with a picnic and the papers, spent all afternoon lying on a blanket in dappled sunlight, drinking wine.

We might have barbecued out back with friends, or gone to The Rose and sat in the beer garden, faces flushing with sun and alcohol as the afternoon went on, weaving home, arm in arm, falling asleep on the sofa.

Beautiful sunshine, cloudless skies, no one to play with, nothing to do. Living like this, the way I’m living at the moment, is harder in the summer when there is so much daylight, so little cover of darkness, when everyone is out and about, being flagrantly, aggressively happy. It’s exhausting, and it makes you feel bad if you’re not joining in.

The weekend stretches out ahead of me, forty-eight empty hours to fill. I lift the can to my mouth again, but there’s not a drop left.

It’s a relief to be back on the 8.04. It’s not that I can’t wait to get into London to start my week – I don’t particularly want to be in London at all. I just want to lean back in the soft, sagging velour seat, feel the warmth of the sunshine streaming through the window, feel the carriage rock back and forth and back and forth, the comforting rhythm of wheels on tracks. I’d rather be here, looking out at the houses beside the track, than almost anywhere else.

There’s a faulty signal on this line, about halfway through my journey. I assume it must be faulty, in any case, because it’s almost always red; we stop there most days, sometimes just for a few seconds, sometimes for minutes on end. If I sit in carriage D, which I usually do, and the train stops at this signal, which it almost always does, I have a perfect view into my favourite track- side house: number fifteen.

Number fifteen is much like the other houses along this stretch of track: a Victorian semi, two storeys high, overlooking a narrow, well-tended garden which runs around twenty feet down towards some fencing, beyond which lie a few metres of no man’s land before you get to the railway track. I know this house by heart. I know every brick, I know the colour of the curtains in the upstairs bedroom (beige, with a dark-blue print), I know that the paint is peeling off the bathroom window frame and that there are four tiles missing from a section of the roof over on the right-hand side.

I know that on warm summer evenings, the occupants of this house, Jason and Jess, sometimes climb out of the large sash window to sit on the makeshift terrace on top of the kitchen- extension roof. They are a perfect, golden couple. He is dark haired and well built, strong, protective, kind. He has a great laugh. She is one of those tiny bird-women, a beauty, pale-skinned with blonde hair cropped short. She has the bone structure to carry that kind of thing off, sharp cheekbones dappled with a sprinkling of freckles, a fine jaw.

While we’re stuck at the red signal, I look for them. Jess is often out there in the mornings, especially in the summer, drinking her coffee. Sometimes, when I see her there, I feel as though she sees me too, I feel as though she looks right back at me, and I want to wave. I’m too self-conscious. I don’t see Jason quite so much, he’s away a lot with work. But even if they’re not there, I think about what they might be up to. Maybe this morning they’ve both got the day off and she’s lying in bed while he makes breakfast, or maybe they’ve gone for a run together, because that’s the sort of thing they do. (Tom and I used to run together on Sundays, me going at slightly above my normal pace, him at about half his, just so we could run side by side.) Maybe Jess is upstairs in the spare room, painting, or maybe they’re in the shower together, her hands pressed against the tiles, his hands on her hips. 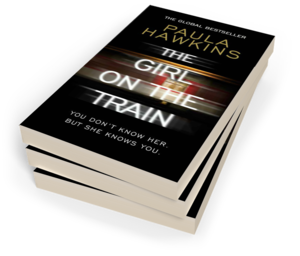 The Girl on the Train Paula Hawkins

THE RUNAWAY SUNDAY TIMES NO.1 BESTSELLER AND THRILLER OF THE YEAR YOU DON'T KNOW HER. BUT SHE KNOWS YOU.