How the Global Elite Was Duped by a Capitalist Fairy Tale

Two Wall Street Journal reporters expose a man who Bill Gates and Western governments entrusted with hundreds of millions of dollars to make profits and end poverty but now stands accused of masterminding one of the biggest, most brazen frauds ever

Arif Naqvi was a man with immeasurable dreams: to end world suffering, poverty and disease. His vision: capitalism for good; profit and progress.

Naqvi was The Key Man to the global elite searching for impact investments - that would make money and do good - in what they called 'emerging markets'. He persuaded Western governments that he could help stabilise the Middle East after 9/11 by providing jobs and trade. When China rejuvenated the ancient Silk Road trading routes, Naqvi guided executives to business opportunities in cities they struggled to find on the map. He teamed up with Bill Gates to create a $1 billion dollar fund to improve healthcare in poor countries, managed huge sums for the American, British and French governments and sat on boards at the UN and Interpol. As the pope blessed the movement to harness capitalism for the good of the poor, Naqvi won the support of Obama's administration and Prince Charles. He was even earmarked by Western academics as a future leader of his homeland, Pakistan. One of his investors compared him to Tom Cruise in Mission: Impossible.

The only problem? In 2019 Arif Naqvi was arrested on charges of fraud and racketeering and faces up to 291 years in jail.

This is the true story of the fascinating investigation into the smoke and mirrors world of Arif Naqvi by Wall Street Journal reporters Simon Clark and Will Louch. Months after they exposed the alleged fraud in 2018, the British police arrested Naqvi as he stepped off a plane at Heathrow Airport and charged him with money laundering and misappropriating hundreds of millions of dollars. In this jaw-dropping account, they expose the alleged fraud at the core of Naqvi's global operation and offer a window into the secretive world of investing and the Davos elite, a world populated by powerful leaders and billionaires who talk publicly about making the world a better place.

Simon Clark is a Pulitzer-nominated journalist at The Wall Street Journal in London. A British citizen, he has been a journalist since 2000, reporting on a wide range of financial, economic and political subjects such as the poppy fields of Afghanistan, the copper mines of Congo and the banks in the City of London.

Will Louch is a British reporter at The Wall Street Journal based in New York.

Praise for The Key Man

An unbelievable true tale of greed, corruption and manipulation among the world's financial elite and how the World Bank, Bill Gates and the governments of the US, UK, France, and many more fell victim to the world's largest private equity Ponzi scheme

This splendid cautionary tale lays bare the vulnerabilities of the world of high finance, where even the grandees of Davos were marks for the kid from Karachi

John Helyar, coauthor of Barbarians at the Gate

Spellbinding. You won't want to put the book down

The rigour and colossal effort that went into this book transpires on each page. There is no dull moment. It is 300 pages of reading pleasure mixed with serious discomfort at what is being presented

A highly readable reminder of how greed and gullibility so often go together, and why we need good investigative journalism to keep reminding us that if the pitch (and the person doing the pitch) look just too good to be true there is probably something fishy going on behind the scenes

Owen Walker, award-winning FT journalist and author of Built on a Lie

A riveting account of the intertwining of brilliance and greed... Should be a mandatory read at all schools of journalism and business schools. It's a rare tour de force from which both can learn

A scorching epilogue... This is tough stuff and this is a tough book that should contribute to much greater scepticism about the bloated financial system

It's a sorry tale, one that raises important questions about our ability to deliver 'ethical' capitalism

Impeccably researched and sumptuous in its detail...It is a page-turner, built around a riveting portrait of the key man of the title. Mr. Naqvi who comes across as a teeming mass of contradictions

This excellent book, which is more true crime than finance, describes in cinematic detail how Naqvi and his colleagues pumped up valuations, moved money between the company, its funds and their personal accounts, and lied about performance

For an astonishing story of how the global economy can be manipulated, read the devastating account in The Key Man

A pacy and deeply-reported tale 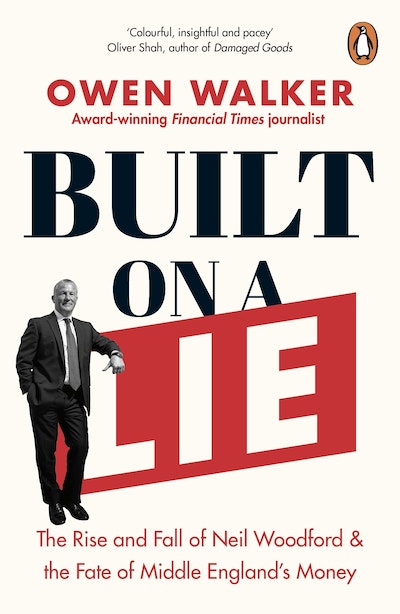 The Man Who Fell to Earth
Owen Walker