The Origins of Everything

David Christian explores our place in the continuum of the Universe.

From the Universe’s origins to the first stars, to our solar system, life on Earth, dinosaurs, homo sapiens, agriculture, an ice age, empires, fossil fuels, a Moon landing and mass globalisation – history opens doors of understanding about our place in the Universe. And according to historian and author David Christian, we should take lessons from what preceded us. His book Origin Story: A Big History of Everything explores what we can learn about human existence when we consider it from a universal scale.

So, what is our place in this procession to and from oblivion? Where did it set out from, where is it heading, and how will it finally fade away? To even begin to answer these questions, first we must understand its origins. In the passage below, Christian explores the ways in which we try to explain how everything came into being.

“Bootstrapping” is the impossible task of lifting yourself into the air by pulling really really hard on your bootstraps. The idea entered computer jargon (“booting” or “rebooting”) to describe how computers wake up from the dead, and then load instructions telling them what to do next. Literally, of course, bootstrapping is impossible, because to lift something you need something to provide leverage. “Give me a place to stand on,” said the Greek philosopher, Archimedes, “and I will move the Earth.” But what could possibly leverage the creation of a new Universe? How do you bootstrap a Universe? Or, for that matter, the origin story that describes how a new Universe appeared?

Bootstrapping origin stories is almost as hard as bootstrapping universes. One possible approach is to vanish the problem of beginnings by assuming the Universe was always there. No bootstrapping needed. Many origin stories have gone this way. So have many modern astronomers, including those who supported the “Steady State” theory in the middle of the twentieth century. This was the idea that at large scales the Universe has always been pretty much as it is today. Similar, but subtly different, is the idea that, yes, there was a moment of creation, when great forces or beings roamed the Universe making things. Since then, nothing much has changed. The elders of Lake Mungo may have seen the universe like this, describing a world brought to life more or less in its current form by their ancestors. Isaac Newton saw God as the “first cause” of everything, and because of that, he thought that the Universe did not change much at large scales. God was literally present in all of space.1 The Universe was: “the Sensorium of a Being incorporeal, living, and intelligent…”2 Early in the twentieth century, Einstein was so sure the Universe was unchanging (at large scales) that he added a special constant to his theory of Relativity to make it predict a stable Universe.

Is the idea of an eternal or unchanging Universe satisfying? Particularly if you have to smuggle in a creator to kick start the process, as in: “In the beginning there was nothing, then God made...” The logical glitch is obvious, though it has taken some sophisticated minds a long time to see it clearly. At the age of 18, Bertrand Russell gave up on the idea of a creator god after reading the following passage in the autobiography of John Stuart Mill: “My father taught me that the question, ‘Who made me?’ cannot be answered, since it immediately suggests the further question, ‘Who made God?’”3

And there’s another puzzle. If a god is powerful enough to deliberately design a Universe, that god must surely be more complex than the Universe. So, assuming a creator God means explaining a fantastically complex Universe by imagining something even more complex that just… created it. Some might think that was cheating.

The ancient Indian hymns known as the Vedas hedge their bets. “There was neither non-existence nor existence then; there was neither the realm of space nor the sky which is beyond.”4 Perhaps everything arose from a sort of primordial tension between being and non-being, a murky realm that was not quite something, but could become something. Perhaps, as a modern Australian Aboriginal saying puts it, nothing is entirely nothing.5 It’s a tricky idea, and some might dismiss it as fuzzy and mystical if it didn’t have striking parallels in the modern idea, embedded with quantum physics, that space is never entirely empty, but is full of possibilities.

1. In the words of Alexandre Koyre, From the Closed World to the Infinite Universe, Baltimore & London: John Hopkins Press, 1957, 274

2. Richard S. Westfall, The Life of Isaac Newton, CUP, 1993, p. 259; he later tried to retract the idea of the Universe as God’s “sensorium”, but preserved the notion, as a friend put it after conversations with him in 1705, that God was “omnipresent in the literal sense”, and “present in space where there is no body [and] present in space where a body is also present” [ibid.] 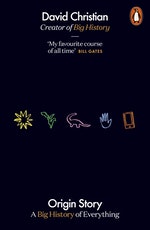 This is the epic story of the universe and our place in it, from 13.8 billion years ago to the remote future.