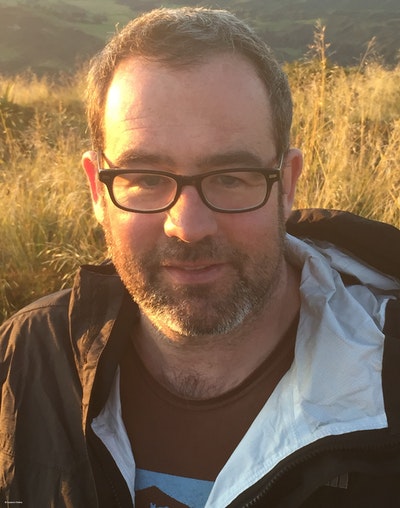 Patricia tried to comb back Willy’s hair, but it sprung over the parting, and Willy squirmed. Hold still, she said, and Willy bolted.

The rain fell, the guttering spilt into the daffodils, the pumpkins all rotted on the vine. Patricia’s daughter Wanda needed Patricia to read lines with her. The Splintered Heart, and Patricia played the bride. Wanda listened to her mother sawing away, then crossed the room in her bright pink socks and told Patricia she was playing it wrong.

Wyatt ran inside, one foot caked with mud. The thunder broke, and the dog went limping off.

Patricia’s hands were full. She kneeled and scrubbed in the doorway. She tapped her fingers on her phone. She undressed in the dark and found Wyatt wrapped up like a frond, gently snoring. She lay down and folded her arms across her chest while the guttering spilt into the daffodils.

A litre of olive oil poured across the kitchen floor. Wyatt ran outside, departing with one foot wet. He was late. In the doorway, Patricia kneeled and scrubbed. She tried to comb back Willy’s hair. The phone rang, the garden pooled. Yes, Patricia said, she could make it. She would be there.

At the meeting, documents awoke. One part admired, another cast aside. Actions bolted, and the chairs all went singing. Patricia’s hands were full, but she would do her part.

Wanda ran through the doorway, her cheeks streaked with rain. Or maybe it wasn’t rain, she didn’t want to talk about it. Patricia reminded her of The Splintered Heart, but it was no use. Rain kept falling down her face and spilling onto her collar, and when Patricia came back downstairs there was Willy tapping his fingers on her phone.

Do you see the rain falling and the gutter spilling into the daffodils? Patricia asked the dark. Don’t you hear the pumpkins rotting on their vines? Wyatt sawed away gently, and she undressed and lay down beside him and curled up like a frond.

Wanda’s pink socks were waiting in the washing, and Willy’s parting was lost. Where was the bride of The Splintered Heart and who would feed the dog? Wyatt tried cooking, talking, cleaning, but he was playing it all wrong. There’s character, Patricia said, folding her arms across her chest, there’s feeling.

Wyatt said she was right, of course. She always remembered, whereas he was late, and the phone was ringing and somewhere, you could be sure, the chairs were singing.

Willy ran inside, one foot caked in pumpkin. The night fell down, neighbours swam across the garden, parting the grass. Had Patricia heard the gutters spilling onto the—but, no, she was kneeling and scrubbing and the dog went limping off.

Patricia undressed in the dark and switched on all the lights so that when Wyatt gently opened his eyes, there she stood, uncurled, and nothing like a frond. No, he said, you’re playing it all wrong.

You’re right, of course, Patricia said, and chopped one finger off.

Wyatt squirmed. Hold still, she said. Don’t you know The Splintered Heart? I play the bride.

She sawed away one foot and both her breasts. Wyatt tried bolting off, but Patricia stood in the doorway, her hands full.

Could he tell her please which part he didn’t want?

Thom’s most recent novel is The Salted Air