A triple Premiership player and All-Australian on-field, the mark Bachar Houli's has created with his football stretches long beyond the MCG and Punt Road.

Houli's ability to mix the modern defensive traits of cover, rebound and provide attack for his team illustrates his versatility and flexibility.

A Vic Metro Under 16 and 18 representative, Houli was drafted by Essendon in the 2006 NAB AFL Draft at selection 42. Playing in a range of roles with the Bombers, Houli was nominated for the NAB Rising Star after an outstanding game in the opening round of 2008. After four years and 26 games at Essendon, the former Western Jet made the move to Richmond at the end of 2010 in search of greater opportunity.

This was achieved over Houli’s first two years at Punt Road. A top five finish in the Best and Fairest in his first year at the Tigers as a running half-back or wing justified the move. Houli played a remarkable 111 games in his first five years with Richmond. A wrist injury limited Houli to 12 games in 2016, but his talent still shone through with five 30-plus possession games.

2017 was a stand-out year for Houli, playing 21 games across the year and averaging 23 disposals per game. He was an integral part in Richmond’s 2017 premiership success and was recognised as one of the best performers of the Grand Final. After an injury interrupted 2018, Houli produced a career best season in 2019, earning his first All-Australian blazer en route to a second Premiership medal. He was second in Norm Smith Medal voting to Dustin Martin – a winning formula for the Tigers as it was in 2017. The coronavirus pandemic brought unprecedented disruption to the 2020 season, but with relocation to Richmond's Gold Coast hub, Bachar made a solid contribution to the campaign, helping to cement The Tigers's legacy as one of the greatest sides of the modern era as he picked up his third Premiership medal, as well as a Jim Stynes Award.

Off the field, Bachar is the AFL's first devout muslim. He has helped bring to life a number of initiatives that have generated great community impact in a short time. The Bachar Houli Cup, an inter-Islamic schools football competition involving Islamic schools across Victoria, as well as the Bachar Houli Academy; established to nuture young Islamic footballers aspiring to follow in Houli’s footsteps as a footballer and person. The launch of the Bachar Houli Foundation will ensure these programs and newly created ones continue the legacy Houli and The Tigers have established.

Houli's love of the outdoors has been brought to life with his association with Victorian Fisheries Authority. As an ambassador for the VFA, the father of three is promoting, teaching and developing fishing right across the state.

‘In my experience, a lot of young Muslims feel they have to stray from Islam to earn people’s respect. My belief, and my message, is the opposite: that doing the right thing and being proud of your identity and beliefs will bring you real success – and even more than that, respect for yourself and your faith.’ FAITH, FOOTBALL and FAMILY is the long-awaited autobiography from one of the AFL's most fascinating men. 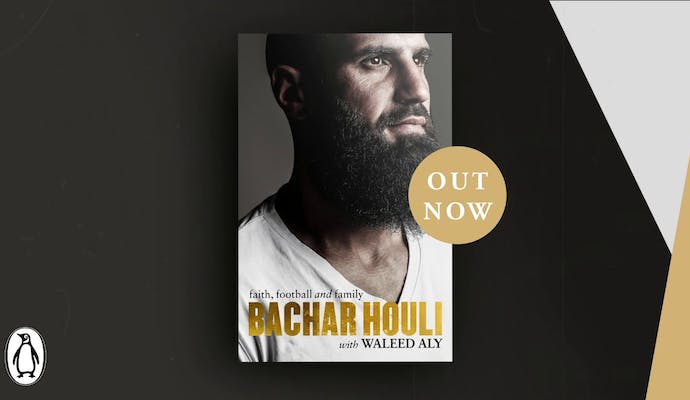 Bachar Houli is as accomplished an AFL footballer as they come. He’s been part of three Richmond Premiership sides, he was an All-Australian in 2019, and with over 200 games to his name he remains a key part of a champion team. Yet it’s as the AFL’s most prominent Muslim player that Houli is best known – and his strong Muslim values are at the heart of the man he is. Writing for the first time, Houli explores the experiences and beliefs that sparked his trailblazing success as a Muslim footballer, and that established him as a leading voice within the AFL community for inclusion, understanding and tolerance. Co-authored with acclaimed broadcaster and writer Waleed Aly, Bachar Houli: Faith, Football and Family tells the unique story of one of football’s most fascinating men.