Prior to joining the Obama Administration, from 2007-2008 Rhodes was a senior speech-writer and foreign policy advisor to the Obama campaign. Before joining then Senator Obama’s campaign, he worked for former Congressman Lee Hamilton from 2002-2007. He was the co-author, with Tom Keen and Lee Hamilton, of Without Precedent: The Inside Story of the 9/11 Commission.

A native New Yorker, Rhodes has a B.A. from Rice University and an M.F.A. from New York University. 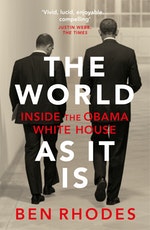 The World As It Is Ben Rhodes

A revelatory, behind-the-scenes account of the Obama presidency from perhaps his closest collaborator, and a political memoir about the power of words to change our world.

Be the first to find out about Ben Rhodes.