Chris Trotter, author of the social and political history No Left Turn: The Distortion of New Zealand’s History by Greed, Bigotry and Right-wing Politics, has been writing weekly political columns since the early 1980s and is one of New Zealand’s leading current affairs analysts. Trotter’s columns currently appear in The Dominion Post, The Press, The Otago Daily Times and a number of provincial dailies. He is also a regular commentator on radio and television. He has been blogging at Bowalley Road since 2008 (www.bowalleyroad.blogspot.com). Trotter was the founder and publisher of the current affairs magazine New ZealandPolitical Review (1992–2005), which he co-edited with the late Bruce Jesson. A trade union and Labour Party activist in his 20s and early 30s, Trotter served as the Secretary of the Otago Trades Council and was twice elected Industrial Representative to the New Zealand Council of Labour Party. He lives in Auckland with his wife and daughter.
Reviewing No Left Turn for the Dominion Post, novelist, poet and critic C K Steaddescribed the it as ‘a dashingly written and persuasive elegy for the Scandinavian-style socialist democracy New Zealand might have been, and at the same time a realistic (though at times appropriately angry) acknowledgement that, given the forces, internal and external, ranged against it, the chances of it happening, and lasting, were never very good’.
Political activist and writer Nicky Hagar wrote: ‘Chris Trotter . . . has written a political history of New Zealand that is refreshing, intelligent and enjoyable.’ Metro’s Jan Corbett called it a ‘rollicking polemic’.
Deputy editor of the Otago Daily Times, Bryan James, said that, with its ‘epic view of nothing less than New Zealand’s colonial and post-colonial political and industrial history’, No Left Turn ‘is a book anyone concerned to be an informed participant in the reconstruction process of New Zealand that began 20 years or so ago needs to read with care’.
OffCampus’s Peter Hawes reviewed No Left Turn ‘rapturously’, hailing it as ‘rigorous, scholarly and toweringly intelligent’, whereas reviewing No Left Turn for the National Business Review, Rob Hosking noted that, while ‘cutting through a lot of the mythology’, ‘mischief is seldom far away and often subtly done’.
The Taranaki Daily News called No Left Turn a ‘readable and vibrant … worker’s potted history of Aotearoa’, and praised Trotter’s ‘thoughtful style’ while acknowledging that the book is ‘spiced with revelations about our history’, concluding that it ‘offers fresh perspectives from the conventional history books like Michael King’s Penguin History of New Zealand and opens up a whole new understanding of the politics of New Zealand today’. Hawke’s Bay Today declared it ‘a worthy companion to King’s history’. Nicky Hagar, writing for The New Zealand Listener, paired the two thus: ‘this is an excellent, readable, thought-provoking book; more useful for understanding New Zealand politics than, for instance, Michael King’s classic but wider-scoped history of New Zealand’.
In the Dominion Post, David Farrar noted that ‘what makes Trotter such a good writer and first-class columnist [is that he] is not afraid to assail those on both the Left and the Right who don’t live up to his vision. You might not agree with his conclusions, but you cannot help but enjoy the story he tells. And it is a story any student of politics or history should read.’
Under the marvellous headline ‘Chris Trotter, rotter spotter’, Mick Ludden wrote for the Wairarapa Times-Age of the ‘refreshing perspectives’ and ‘tantalising glimpses’ Trotter provides in his ‘ground-shaking book’. Also in the Dominion Post, it is said that ‘the passion and subjectivity of Trotter’s views do not detract from No Left Turn, they bring it to life. It is one of those books you find hard to put down, once you start. Trotter manages to bring to life the conflicts of the past as he links them together as one great struggle.’
Arthur Toms, in the Greymouth Star, said that Trotter’s book reflects his wide reading alongside ‘his own experience, and illuminated all that with his considerable intelligence’.
The Marlborough Express found this account by ‘an exuberant, thoughtful and informed commentator’ marked by a ‘fine writing style and ability to bring to life the struggles … that are now part of New Zealand’s history’. Not only is the book ‘difficult to put down’, it is ‘stimulating, absorbing and encouraging debate’.
Former Alliance MP and now national secretary of the National Distribution Union, Laila Harre wrote in the Sunday Star Times, ‘No Left Turn respects both the troublemakers and the dealmakers by telling their stories in an honourable way.’
In Foreign Control Watchdog, Jeremy Agar called No Left Turn ‘a sharp and entertaining synthesis’ which showcases Trotter’s ‘nice turn of phrase’. He positioned it thus: ‘As a history of the power and the methods of reaction it’s a useful background companion to the foreground of Nicky Hagar’s Hollow Men.’ 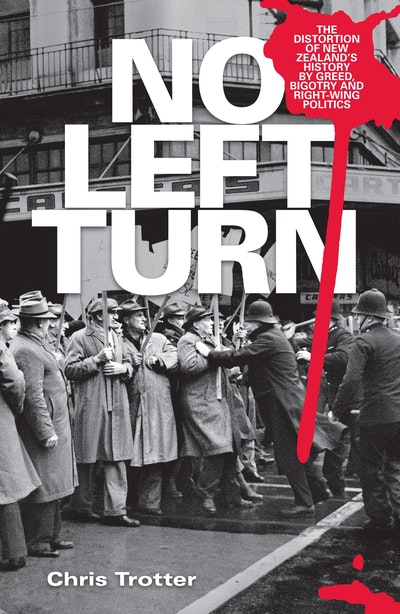