Christopher de Bellaigue was born in London in 1971, and was educated at Cambridge University, where he read Iranian and Indian Studies. Between 1995 and 2007, he lived and worked as a journalist in south Asia and the Middle East, writing for The Economist, Guardian and the New York Review of Books. He is the award-winning author of four books and has made several BBC television and radio programmes. He lives in London. 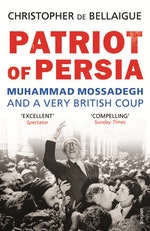 Be the first to find out about Christopher de Bellaigue.