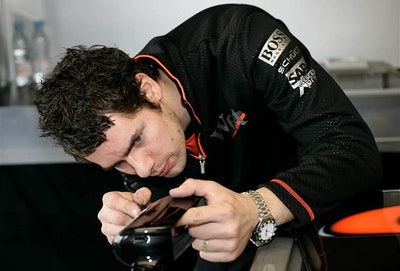 Book for an event
f1elvis.com

Marc 'Elvis' Priestley worked for McLaren Racing as a Formula One mechanic and member of the pitstop crew from 2000-2009. He worked with a distinguished list of drivers including Mika Hakkinen, David Coulthard, Kimi Raikkonen, Jean Alesi, Juan Pablo Montoya, Fernando Alonso and Lewis Hamilton.

Following his retirement from McLaren, Elvis's first broadcast role was as pitlane reporter for BBC Radio 5 Live, where he was able to share his vast technical experience of the cars and equipment with listeners. Since then, Elvis has become an integral part of Sky's F1 coverage. He is now a co-host on the channel’s studio-based chat show, The F1 Report, as well as attending a number of Grand Prix events.