The Night of All Souls launch speech from Harriet Allan

As the launch for The Night of All Souls by Philippa Swan could not go ahead as planned our Fiction Publisher, Harriet Allan, has shared the speech she would have given.

Although April is rather a challenging month for its release, I’m very proud to be publishing this novel.

It is a Tardis of a book, for within its covers are various intriguing stories, a modern novella with an unusual love-hate triangle, a visit to the afterlife, biographical details of Edith Wharton, including the revelation of a secret love affair and indeed walk-on parts for Edith and a number of her circle, a tour through the gardens Edith wrote about and visited in Italy and created in America and France, plus snippets from Wharton’s own novels, poetry and memoir, and a whole lot more besides – all of which is integrated into a wonderfully upbeat and enthralling novel.

Philippa is indeed a literary Dr Who, taking us through time and space. We watch the young Edith in a rowing boat, waiting for a marriage proposal that never comes, we visit the Mount, the mansion she went on to build in Massachusetts, we drive with her, Henry James and a dashing rogue through the snowy countryside, we travel to modern-day Hyères in the south of France, and we are flies on the wall of a seedy hotel room in London.

When I used to picture Edith Wharton, I’d think of an amalgam of Gillian Anderson playing Lily Bart in the film of The House of Mirth, the wonderfully pompous characters that people Wharton’s novels and often deliver the acerbic and hilarious one-liners that would give Jane Austen a run for her money, and the photographs of Wharton that generally capture very grand settings and clothes but so often a rather wistful expression that has always made me wonder what the real woman was like. Thanks to The Night of All Souls, I now reckon I know her rather well. She’s come alive again in this novel and is someone I’m very reluctant to say goodbye to.

In fact, everyone who worked on this novel expressed reluctance at having to pass it on – we all wanted to stay in these multiple worlds, getting to know this fascinating woman. You can sample a chapter here and look out for the Penguin Facebook page for Philippa’s launch speech and her daughter reading an extract.

You can access a copy through numerous online channels outlined here.

Marsden Books in Karori was going to launch The Night of All Souls, so a big shout-out to them. As soon as bookshops open again, you can of course also purchase physical copies, and I urge you to do so as it is well worth making the acquaintance of Edith Wharton. 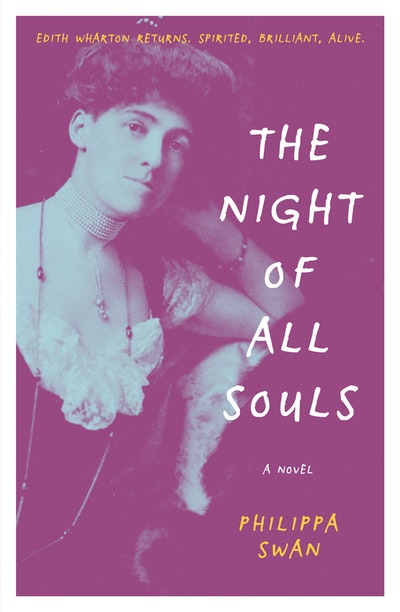 The Night of All Souls Philippa Swan