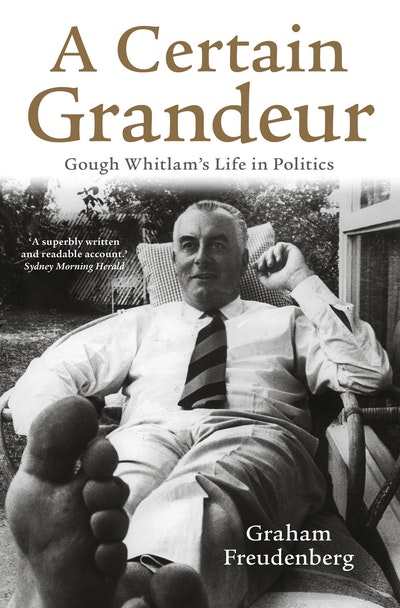 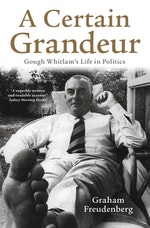 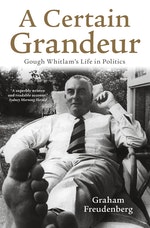 Graham Freudenberg's inside account of Gough Whitlam's political rise and fall is one of the great classics of Australian political writing.

Winner of the Age Book of the Year Award

Graham Freudenberg's inside account of Gough Whitlam's political rise and fall is one of the great classics of Australian political writing.  From his position as Gough's speechwriter and confidant, just out of the spotlight of history, Freudenberg was an eyewitness to Gough's spectacular rise and fall, which he documents with compelling drama.  But A Certain Grandeur's most significant achievement is to capture so vividly the character of the man – dictatorial, petulant, erudite, revolutionary.

This new edition has been updated to include the Labor Party's regeneration following the Dismissal, and to lay to rest myths about Gough and his government's achievements that have prevailed in the three decades since, including those surrounding what has become one of the most controversial legacies: East Timor.

'A first-class speechwriter of an intellectually commanding political leader meets the challenges to think and insinuate his way inside the mind of the master . . . This Freudenberg has done splendidly.' The Age

'He writes with balance and grace, and with a carefully modulated intensity.' The Australian
'Human, sympathetic, and eminently readable . . . An important study of the evolution of Labor policies and the Australian Labor Party itself.' Canberra Times
'Brilliant.' Laurie Oakes

Graham Freudenberg was born in Brisbane in 1934. A journalist in Sydney and Melbourne, he was appointed press secretary to the Leader of the Australian Labor Party, Arthur Calwell, in 1961. In that capacity, he developed his best-known role as speechwriter to a succession of Labor leaders, including Gough Whitlam (1967-77); New South Wales premiers Neville Wran (1976-86), Barrie Unsworth (1986-88) and Bob Carr (1991-2003); and Prime Minister Bob Hawke (1983-1991). His principal publications are A Certain Grandeur (1977), A Figure of Speech: A Political Memoir (2005) and Churchill and Australia (2008).

Praise for A Certain Grandeur

“He writes with balance and grace, and with a carefully modulated intensity.”

“Human, sympathetic, and eminently readable ... An important study of the evolution of Labor policies and the Australian Labor Party itself.”