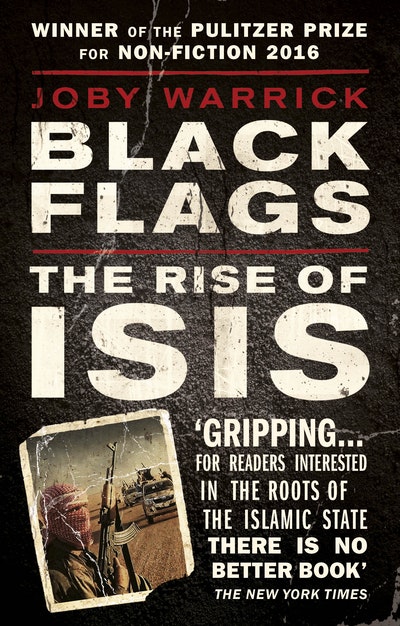 The Rise of ISIS 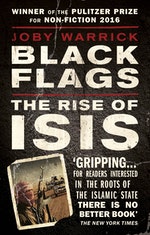 The definitive account of the world's most dangerous terrorist threat, from Pulitzer Prize-winning journalist Joby Warrick.

In a thrilling dramatic narrative, Pulitzer Prize-winning reporter Joby Warrick traces how the strain of militant Islam behind ISIS first arose in a remote Jordanian prison and spread to become the world's greatest threat.

When the government of Jordan granted amnesty to a group of political prisoners in 1999, it little realized that among them was Abu Musab al-Zarqawi, a terrorist mastermind and soon the architect of an Islamist movement bent on dominating the Middle East. In Black Flags, an unprecedented character-driven account of the rise of ISIS, Joby Warrick shows how the zeal of this one man and the strategic mistakes of Western governments led to the banner of ISIS being raised over huge swathes of Syria and Iraq.

Zarqawi began by directing terror attacks from a base in northern Iraq, but it was the allied invasion in 2003 that catapulted him to the head of a vast insurgency. By falsely identifying him as the link between Saddam Hussein and Osama bin Laden, Western officials inadvertently spurred like-minded radicals to rally to his cause. Their wave of brutal beheadings and suicide bombings persisted until American and Jordanian intelligence discovered clues that led to a lethal airstrike on Zarqawi’s hideout in 2006.

His movement, however, endured. First calling themselves al-Qaeda in Iraq, then Islamic State of Iraq and Syria, or ISIS, his followers sought refuge in unstable, ungoverned pockets on the Iraq-Syria border. When the Syrian civil war broke out in 2011, and the rest of the world largely stood by, ISIS seized its chance to pursue Zarqawi’s dream of an ultra-conservative Islamic caliphate.

Drawing on unique high-level access to global intelligence sources, Warrick weaves gripping, moment-by-moment operational details with the perspectives of diplomats and spies, generals and heads of state, many of whom foresaw a menace worse than al Qaeda and tried desperately to stop it. Black Flags is a brilliant and definitive history that reveals the long arc of today’s most dangerous extremist threat.

JOBY WARRICK has been a reporter for The Washington Post since 1996. He is a two-time winner of the Pulitzer Prize, and the author of The Triple Agent. 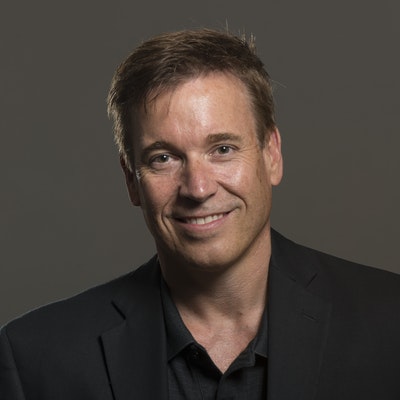 “A deeply reported book of remarkable clarity showing how the flawed rationale for the Iraq War led to the explosive growth of the Islamic State.”

“Compelling and authoritative, with the narrative drive of a thriller.”

“Joby Warrick moves easily through the intelligence warrens of Washington and the shattered landscape of the Middle East to tell this insightful narrative of the rise of the Islamic State. Black Flags is an invaluable guide to an unfolding tragedy that must be understood before it can be ended.”

Lawrence Wright, author of Thirteen Days in September and The Looming Tower

“A deep, well-balanced and thought-provoking account with a genuine feel for Middle Eastern realities.”

“This is journalism at its best: clear, readable and enlightening.”

“Joby Warrick is one of America's leading national security reporters, so it's no surprise that Black Flags is the most deeply reported and well-written account we have about ISIS and its terrorist army.”

Peter Bergen, author of Manhunt: The Ten-Year Search for bin Laden from 9/11 to Abbottabad

“Invaluable for anyone struggling to understand the gruesome excesses and inexplicable appeal of ISIS. As this seminal book makes alarmingly clear, Zarqawi's appalling legacy won't fade any time soon.”

“Gripping … Warrick has a gift for constructing narratives with a novelistic energy and detail, and in this volume he creates the most revealing portrait yet laid out in a book of Abu Musab Al-Zarqawi, the founding father of the organization that would become the Islamic State… For readers interested in the roots of the Islamic State and the evil genius of its godfather, there is no better book to begin with than Black Flags.”

“Gripping ... a zippy, atmospheric and character-led narrative. It offers a necessary and important backstory to the unfurling of black flags across Syria and Iraq today.”

“A page-turner and a flat-out great book. This is the inside account of how we ended up with the Islamic State, with one revelation after another. If you read one book on ISIS, this is it.”

Robert Baer, author of See No Evil: The True Story of a Ground Soldier in the CIA's War on Terrorism

“Drawing on his unrivaled sources and access, Joby Warrick has written a profoundly important and groundbreaking book, one that reads like a novel, riveting from the first page to the last. If you want to know the story behind ISIS, and all of us should, this is the book you must read.”

“Riveting and detailed... Warrick’s book might be the most thorough and nuanced account of the birth and growth of ISIS published so far. Black Flags is full of personalities, but it keeps its gaze carefully focused on the wider arc of history.”

“Joby Warrick is an exceptional storyteller, and Black Flags is both illuminating and spellbinding. No book better explains the miscalculations, wrong turns, and bad luck that led to the rise of ISIS.”

“Joby Warrick weaves Black Flags with the tradecraft of a spy, the mind of an investigative reporter, and the pen of a novelist.”

“Compulsively readable. What makes Warrick’s book unique is its focus on the group’s roots, especially the evolution of its founder.”

“Warrick charts Zarqawi’s rise from booze-swilling Jordanian street tough to one of the most brutal jihadists in the world.”

“A revealing, riveting and exquisitely detailed account of the life and death of Zarqawi, the improbable terrorist mastermind, and the rise of the movement now known as the Islamic State.”

“Clear and well-told … [it] lays out in strong detail just how rough a neighborhood, both geographically and ideologically, the struggle against ISIS is taking place in.”

“Joby Warrick has written a penetrating and fascinating look at the birth and evolution of the world’s most violent terrorist network, ISIS. This is an eye-opening book … The author tells his story through rich details and revealing anecdotes that bring you into the violent world of Islamic extremism. At times, you feel as if you’re sitting in a tent in a remote region of Iraq, watching and listening to al-Zarqawi as he claws his way to the top of the terrorist chain. The writing is crisp, the reporting incredible, a combination of extensive digging and terrific use of sources.” 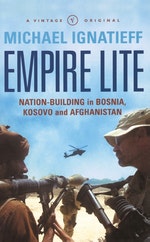