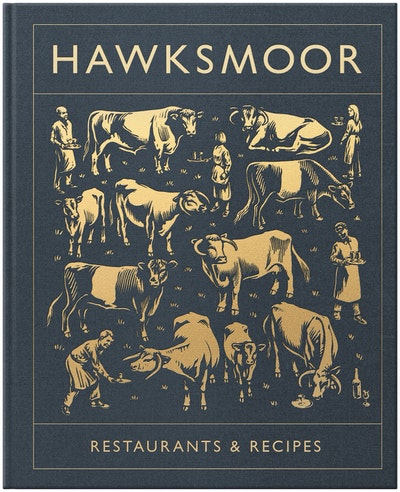 A new book from the restaurateurs and authors of the bestselling Hawksmoor at Home, containing brand new recipes and smash-hit cocktails that have customers and critics raving.

‘Hawksmoor has redefined the steakhouse. It’s brought great food, an amazing vibe and great cocktails together all under one roof to make it one of the best restaurants, not just in London, but in all of Britain.’ Gordon Ramsay

From inauspicious beginnings, Hawksmoor has become a restaurant institution. Both the company and the restaurants have won numerous awards, and the distinctly British food, revolving around charcoal-grilled steaks and seafood, has made Hawksmoor amongst the busiest restaurants in the country. Now with seven restaurants, including a dedicated cocktail bar, Hawksmoor brings you Restaurants & Recipes, an essential read for anyone interested in the realities of restaurants, revealing the trials and tribulations faced along the way, as well as the people, places and plates that have made it so successful. From refined, tweaked and perfected Hawksmoor favourites like Mac ’n’ Cheese to the Steak Slice that caused a social media storm, and from a light and elegant Lobster Slaw to big carnivorous sharing feasts, this bookwill make you look at the classics anew and fall in love with a whole new collection of dishes for the first time. Bringing together recipes from all the Hawksmoor restaurants, and with insights like how to cook the titans of steaks like the Tomahawk, and the intricate cocktail spec sheets used by the bar staff, Hawksmoor: Restaurants & Recipes is the ultimate bible for booze and beefy perfection – an immaculately researched, sometimes irreverent look into Hawksmoor’s obsessions and inspirations.

Huw Gott and Will Beckett have been best friends since they were eleven, and are the owners and co-founders of Hawksmoor.

Huw Gott and Will Beckett have been best friends since they were eleven, and are the owners and co-founders of Hawksmoor.

Definitely a cracker of a cookbook

An unputdownable tome of witty prose, teaming helpful how-tos (e.g. ‘dispatching’ a lobster humanely), and mouthwatering recipes … A delightfully entertaining read, one that’ll have you smiling and salivating in equal measures, reaching for the phone to make a reservation, and quite possibly perusing their recruitment page for openings … this, for its originality, entertainment factor and promise of deliciousness, is hands down my favourite.

If a city gets the restaurant it deserves then London has clearly been a very good girl of late.

Flawless, the best steak you will find anywhere.

I love Hawksmoor. Whenever I feel the need for fabulous meat it's the place I go.

A great read for anyone interested in the running of a restaurant group, with insights into the people, ingredients, and attention to detail that make it so successful

The ultimate bible for booze-and-beefy perfection