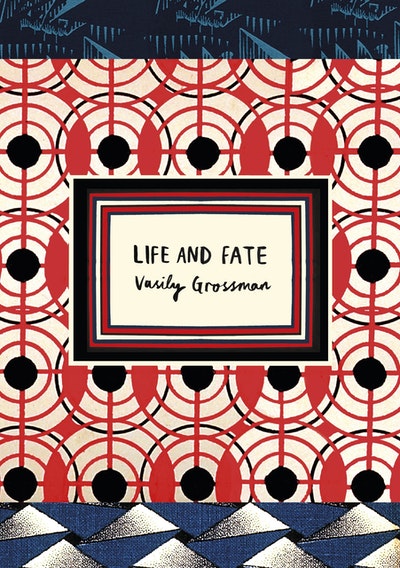 The great Russian 20th-century novel from the Sunday Times bestselling author of Stalingrad.

Life and Fate is an epic tale of a country told through the fate of a single family, the Shaposhnikovs. As the battle of Stalingrad looms, Grossman's characters must work out their destinies in a world torn by ideological tyranny and war.

Completed in 1960 and then confiscated by the KGB, this sweeping panorama of Soviet Society remained unpublished until it was smuggled into the West in 1980, where it was hailed as a masterpiece.

The Vintage Classics Russians Series - sumptuous editions of the greatest books to come out of Russia during the most tumultuous period in its history.

One of the greatest masterpieces of the twentieth century

It is only a matter of time before Grossman is acknowledged as one of the great writers of the 20th century... Life and Fate is a book that demands to be talked about

One of the finest Russian novels of the 20th century

Vasily Grossman's novel is burnt in my memory, not only by its huge canvas, its meditation on tyranny, and its dazzling description of war, but also because this is the novel that made me cry - not just a few leaked tears, but a full-scale sobbing episode - in Montpellier airport... Grossman lost his mother in a concentration camp. In Life and Fate, he writes with tenderness, and pain, not only of that experience but of what it is like to survive tyranny. A classic indeed

One of the great writers of the last century

A literary genius. His Life And Fate is rated by many as the finest Russian novel of the 20th Century

One of the world's great war novels

Vasily Grossman's masterpiece, Life and Fate, is fascinating for many reasons, and one of them is the way that it is both a pastiche and a personal statement; a conscious, cold-blooded attempt to sum up everything Grossman knew about the Great Patriotic War, and at the same time to rewrite War and Peace