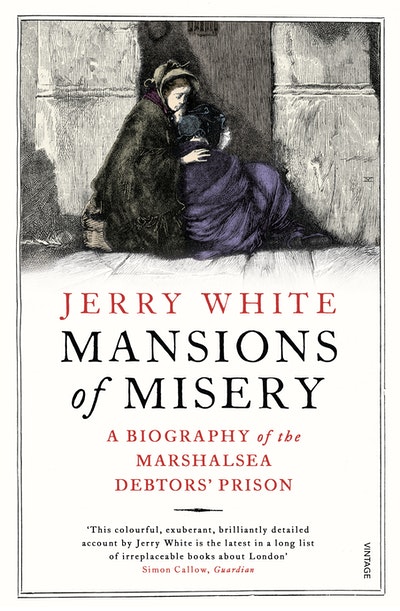 A Biography of the Marshalsea Debtors’ Prison

A micro-history of 18th & 19th century London and the story of the capital’s notorious debtors’ prison, immortalised by Charles Dickens

For Londoners of the eighteenth and nineteenth centuries, debt was a part of everyday life. But when your creditors lost their patience, you might be thrown into one of the capital’s most notorious jails: the Marshalsea Debtors’ Prison.

In Mansions of Misery, acclaimed chronicler of the capital Jerry White introduces us to the Marshalsea’s unfortunate prisoners – rich and poor; men and women; spongers, fraudsters and innocents. We get to know the trumpeter John Grano who wined and dined with the prison governor and continued to compose music whilst other prisoners were tortured and starved to death. We meet the bare-knuckle fighter known as the Bold Smuggler, who fell on hard times after being beaten by the Chelsea Snob. And then there’s Joshua Reeve Lowe, who saved Queen Victoria from assassination in Hyde Park in 1820, but whose heroism couldn’t save him from the Marshalsea. Told through these extraordinary lives, Mansions of Misery gives us a fascinating and unforgettable cross-section of London life from the early 1700s to the 1840s.

Praise for Mansions of Misery

This colourful, exuberant, brilliantly detailed account by Jerry White is the latest in a long list of irreplaceable books about London.

[It] is searching and brimful of intriguing characters.

[A] marvellous history of the Marshalsea Debtor’s Prison… In vivid prose White conjures a murky underworld of jailbird chancers and scufflers of one stripe or another.

A factual portrait of desperate and roughish Londoners that is as startling as anything in Dickens. Its wealth of anecdote and sympathetic style, spiced with witty observations makes this the very opposite of a miserable read.

The way White has written this book, it is as if the Marshalsea is a microcosm of life outside the walls in the London area. He shows that there was a complete mixture of inmates, rich and poor, fraudsters and hucksters, and many other colourful characters filled the prison. I found this to be a fascinating and engaging read about a place that people often forget was a dark shadow over many lives. Jerry White has written an engaging and very readable account of life in the Marshalsea and of London during the eighteenth and nineteenth centuries. I am sure it will be a must read for all those interested in the social history of London for many years to come

[A] colorful, exuberant, brilliantly detailed account… The latest in a long list of irreplaceable books about London

White’s absorbing book is a salutary reminder of the realities of debt.

This is a splendid book providing a vivid image of the Hanoverian and early Victorian worlds, of their societies and, particularly, of a cross-section of people living on the edge.