Paris After The Liberation 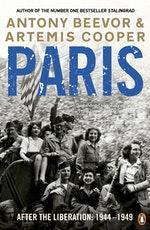 Post liberation Paris - an epoch charged with political and conflicting emotions. Liberation was greeted with joy but marked by recriminations and the trauma of purges. The feverish intellectual arguments of the young took place amidst the mundane reality of hunger and fuel shortages. This is a stunning historical account of one of the most stimulating periods in twentieth century French history.

Antony Beevor's books include Crete - The Battle and the Resistance, which won a Runciman Prize; Paris After the Liberation, 1944-1949 (written with his wife, Artemis Cooper); Stalingrad, which won the Samuel Johnson Prize, the Wolfson Prize for History and the Hawthornden Prize for Literature; Berlin - The Downfall, which received the first Longman ­History Today Trustees' Award; and, most recently, The Battle for Spain. His books have appeared in thirty foreign editions and sold nearly four million copies.