The renowned biographer's definitive portrait of a literary titan

Bailey shows how Roth emerged from a lower-middle-class Jewish milieu to achieve the heights of literary fame, how his career was nearly derailed by his catastrophic first marriage, and how he championed the work of dissident novelists behind the Iron Curtain. Bailey examines Roth's rivalrous friendships with Saul Bellow, John Updike and William Styron, and reveals the truths of his florid love life, culminating in his almost-twenty-year relationship with actress Claire Bloom, who pilloried Roth in her 1996 memoir, Leaving a Doll's House. Tracing Roth's path from realism to farce to metafiction to the tragic masterpieces of the American Trilogy, Bailey explores Roth's engagement with nearly every aspect of post-war American culture.

Philip Roth, to go with his legendary talent, was a lucky man. That streak continues with Blake Bailey's charming, wise, and witty biography, which achieves a balance and comprehensiveness that shouldn't have been possible so soon after Roth's death.

A monumental gift... Not only does Blake Bailey bring his famously scrupulous research to bear on this life packed with equal parts honour and scandal, he does so with economy and narrative force - all while working in elegant, unforgettable prose... I wept and railed, marvelled and shook my fist at the sky. 'Just make me interesting,' Roth asked of Bailey, and this unputdownable page-turner does just that.

In this excellent biography, Bailey offers an evenhanded portrait of [Roth]... Outstanding.

Bailey brings his talents to bear in this remarkable portrait of lauded and divisive literary titan Philip Roth... In consistently luminous, humorous prose, Bailey vividly evokes Roth as a writer and a man... A stunning feat, this is as dynamic and gripping as any of Roth's own fictions.

Bailey is a very good writer and a very good literary biographer... What a story... Along with it comes the man in his wholeness.

Superlative... Bailey's account is definitive and genuinely gripping to boot... He leads us lucidly through a dense palimpsest of overlapping drafts, fictional identities, literary feuds and women.

Unassailable as to fact... clear-eyed... quickly moving... Philip Roth seems as brightly peopled as a Victorian novel. ... What [Bailey] does superbly... is chart Roth's sexual and emotional life, and map its effects on his work.

[A] totemic and compulsively readable biography.

"Magisterial" and "definitive"... don't do justice to Blake Bailey's years-in-the-making opus. ... Bailey meticulously conjures the career of one of America's literary titans, the devils and angels that shaped his work.

It's a miracle that he has published so lucid a book just three years after Roth's death - and one so packed with good anecdotes and jokes... It's an achievement for Bailey to have gained as much distance as he has.

Compulsively readable... Beautifully written... It is hard to imagine a book that will come up with a more definitive series of answers than this one.

The 19th-century novel lives on. Its name today is Biography; its nature is that of Dostoyevskian magnitude. And Blake Bailey's comprehensive life of Philip Roth - to tell it outright - is a narrative masterwork.'

Philip Roth, for all his flaws, for all that I know his legacy will continue to be judged in judgmental times and found wanting, deserves this riveting, serious and deeply intelligent biography.

Bailey has certainly done the legwork... in Rothian detail... recounting the story of a man who squatted over American literary culture for half a century.

Fascinating... Bailey's book is rewarding for those who want to see a diligent biographer illuminate connections between Roth's life and art.

A thorough, balanced, and eminently restrained account... It is impossible to come to the end of this book not loving this man just a little.

Exhaustive... Bailey...give[s] the reader a vivid sense of the richly varying modes in which Roth operated.

[A] monumental and engrossing book... Bailey brings new information and a fresh perspective... No other biographer will have known Roth so well.

Blake Bailey has produced a satisfyingly definitive work. Philip Roth is comprehensive, unflagging and attentive to detail, and written with an easy literary elegance that keeps the reader turning its 900-plus pages.

A book fit for a cultural heavyweight. 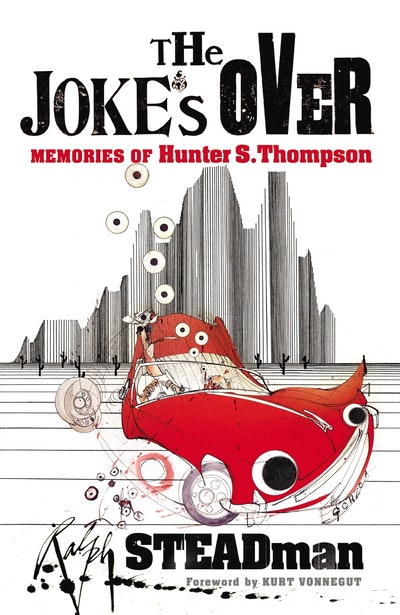 The Joke's Over
Ralph Steadman