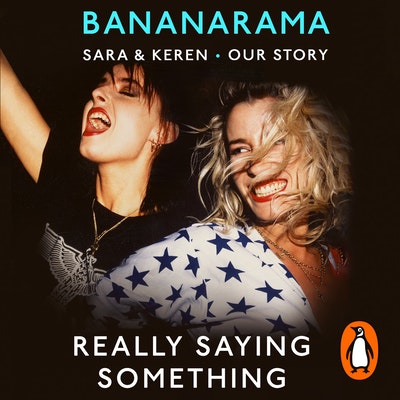 The first and only book from one of the most influential girl groups of all time.

Brought to you by Penguin.MUSIC, FAME AND A LIFELONG FRIENDSHIP.

In the early eighties, best friends Sara Dallin and Keren Woodward arrived at the YWCA in London, with their sights set on careers in journalism and the media... but that wasn’t to be.

London was the most vibrant and culturally innovative of places, and within the whirl of clubs, parties and new friends, a chance meeting with former Sex Pistol Paul Cook changed everything. Moving into Malcolm McLaren’s old office, they started rehearsing and singing background vocals for Paul’s new band, before teaming up with Sara’s college friend Siobhan, and forming their own group.

It wasn’t long before they’d made their first appearance on Top of the Pops, wearing clothes they’d made themselves, and not sure which camera to look at. Who could have imagined that this would be the birth of one of the biggest-selling female bands of all time? Bananarama!

From a groundbreaking performance at The Brits, to sold-out world tours, party games with George Michael, hanging out with Andy Warhol in New York and a Guinness World Record, Bananarama’s DIY-style and attitude inspired a generation, obliterating all previous notions of what a girl band was or could be. Whether opening up about the challenges of making it in a male dominated industry, balancing motherhood and fame, the hairstyles and TV interviews they’d rather forget, or the joys of writing and recording new music, Sara and Keren are honest, revealing and hilarious.

Really Saying Something is the story of two friends who continue to pursue their dreams their way – and have a great time doing it. It is a celebration of determination and a lifelong friendship, with an unbeatable soundtrack.