Running with the Firm 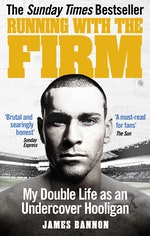 'Of course I'm a f**king hooligan, you pr**k. I am a hooligan...there I've said it...I'm a hooligan. And, do you know why? Because that's my f**king job.'In 1995, a film called I.D., about an ambitious young copper who was sent undercover to track down the ‘generals’ of a football hooligan gang, achieved cult status for its sheer brutality and unsettling insight into the dark and often bloody side of the so-called beautiful game.

The film was so shocking it was hard to believe the mindless events that took place could ever happen in the real world. Well, believe it now...

Almost twenty years on, the man behind the film has explosively revealed that the script was largely a true story. That man, James Bannon, was the ambitious undercover cop. The football club was Millwall F.C. and the gang that he infiltrated was The Bushwackers, among the most brutal and fearless in English football.

In Running with the Firm, Bannon shares his intense and dangerous journey into the underworld of football hooliganism where sickening levels of violence prevail over anything else. He introduces you to the hardest thugs from football’s most notorious gangs, tells all about the secret and almost comical police operations that were meant to bring them down, and, how once you’re on the inside, getting out from the mob proves to be the biggest mission of all.

A disturbing but compelling read, this is the book that proves fact really is stranger than fiction.

James Bannon was born in 1965, in Lambeth, south London. After five years of service with the Metropolitan Police, spending a large amount of time as an undercover police officer, he has continued to live a rich and colourful life as an actor, comedian, property developer and proprietor of his own commercial airline. He is an ambassador for The Prince’s Trust and lives in Sussex with his family.

Praise for Running with the Firm

“A must-read for fans”