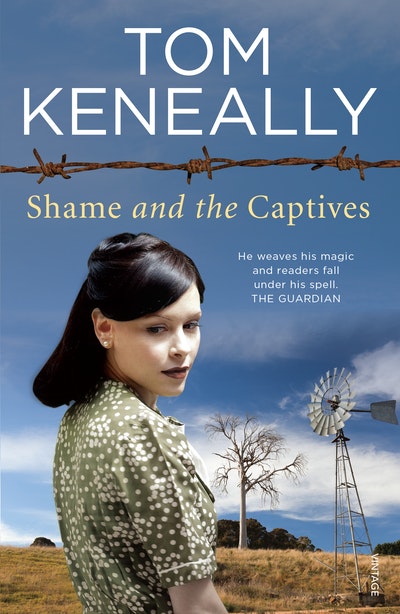 Shame and the Captives

In the spirit of The Daughters of Mars, Tom Keneally’s new novel brilliantly explores the intimacies of ordinary lives being played out against momentous world events.

In Gawell, New South Wales, a prisoner-of-war camp to house European, Korean and Japanese captives is built close to a farming community. Alice is a young woman living a dull life with her father-in-law on his farm while her new husband first fights, then is taken prisoner, in Greece. When Giancarlo, an Italian POW and anarchist from Gawell’s camp, is assigned to work on their farm, Alice’s view of the world and her self-knowledge are dramatically expanded.

But what most challenges Alice and the town is the foreignness of the Japanese compound and its culture, entirely perplexing to the inmates’ captors. Driven by a desperate need to validate the funerals already held for them in Japan, the prisoners vote to take part in an outbreak, and the bloodshed and chaos this precipitates shatter the certainties and safeties of all who inhabit the region.

Praise for Shame and the Captives

If the legendary Schindler’s List was not enough to showcase Thomas Keneally’s literary mastery, then Shame and the Captives surely will. It is clear from the start how thorough are Keneally’s research and cultural understanding; and he showcases them with brilliant, masterful writing. Shame and the Captives is an example of fine writing that has the power to entice modern readers and those interested in the truthful reflection of the human spirit, no matter the place, culture or generation.

I’ve read only a dozen or so of the 30 or more novels Keneally has written. This is at least as good as any of them, and better, I should say, than Schindler’s Ark. he narrative is gripping, slow-moving but absorbing for the first half and more of the novel, then fast-moving, exciting and appalling. The account of the break-out is horrifying, and one can’t think it could have been better done. Keneally is not a novelist who stints on action. Here he has made a remarkable, and largely successful attempt to get into the minds of people very different from himself, surely one of the marks of the true novelist. Tengan and his colleagues might, in the hands of a lesser novelist, have seemed absurd in their obsession with shame and their cult of death: Keneally’s imaginative understanding of them makes Tengan strangely sympathetic. This is a remarkable achievement.

Then he turns, with a virtuosity he has rarely matched, to giving us - through select, concentrated detail - a sense of the wider lives of the participants in this story, for all that our acquaintance with them is partial. Keneally's gift, and his blessing to the many hundreds of characters he has created, is always to find the extraordinary within the ordinary. Each of them rises out of and above their varying backgrounds: the class, religion, ambition that mark but do not define them. The title of the novel, Shame and the Captives, has a deliberate ambiguity and a measure of awkwardness that makes us pause to consider the moral complexity of yet another of Keneally's grand entertainments.

He gives vivid human faces to the victims and the perpetrators of war. He weaves his magic and the reader falls under his spell. Keneally negotiates the separate and intertwining narratives with his usual elegance and skill.

No one equals Keneally for documenting the actions of human beings caught up in war, some desperate to hold onto their humanity, others desperate to die.

Here, as in The Daughters of Mars and other relatively recent novels, there is an intelligence and a mastery of conventional modes of narrative. Shame and the Captives entertains and informs, and that alone is a considerable achievement.

Keneally is, of course, famous for his ability to put a human face on both perpetrators and victims of war, but this novel excels in its haunting portrayal of not just individuals, but of the yawning chasm between the cosmologies they inhabit.

At its most basic, Shame and the Captives is a retelling of the Cowra breakout. Something which was long overdue. But it is much more than that. Keneally cleverly (and effortlessly) divides his story into many sub stories and embeds his reader into each one. We mingle with Japanese POWs, hear their stories, feel their shame and share their frustrations; we are sent out to the farms as labourers with the Italian POWs; we wait out the war far from the frontlines with the British and Australian camp guards and officers; we share in the guilt and confusion of a woman who's trying to remember her captured husband's face whilst an attractive Italian POW labours away for her father-in-law in the sun outside her window. All the while trouble brews. We know the story of the Cowra breakout. We have never had it told like this.

Like all good historical fiction we are reminded that history does not happen to others in some remote place, history happens to all of us and every day. All in all a really enjoyable novel, I read in two days eager to find out how it all ended, even though I knew exactly how it was going to end. If you are a Tom Keneally fan expect the usual: well researched, multilayered novel on a fascinating topic where ordinary people take center stage. Shame and the Captives is also a kind of book that will probably make you want to discover a little bit more about this tragic episode in both Australian and Japanese history.

Shame and the Captives is a thought-provoking book that seems very timely. This year is the anniversary of the beginning of 'the war to end all wars'. There will be no escaping the memorialising of that conflict. But in this book, set in the somnolent winter sunshine of western NSW, Keneally has captured a side of military conflict that is rarely explored in historical novels set in wartime.

The writing is meticulous and utterly unshowy. The slumbrous, dour rhythms of country life and the mordant Aussie patois are just right. Individual relationships, homicidal or homely, counterpoint the public moments of tumult and fanaticism. It's a story that gathers momentum like a landslide. And, as usual with Keneally, it's rich with meditations on human failings and yearnings.

His incredible facility as a teller of tales, is undimmed. Rich, complex, deeply empathetic novel. Along the fault-lines of this violent event, Keneally locates his compelling study of the cultural differences of nations brought into conflict by war. Shame and the Captives is a tremendously accomplished novel, rich in character, detail and incident. It is the work of a master novelist who shows no sign of slowing down, and for this we should be grateful.

We are all prisoners, Keneally is telling us, of culture, relationships, the past. It is a tribute to his consummate skill as a fabricator of fiction that the final, apocalyptic shattering of the mirror feels inevitable.

An Australian prisoner-of-war camp in 1943 is the unexpectedly rich setting for Thomas Keneally’s intriguing new novel, based – like his best-selling Schindler’s Ark – on real events… Keneally skilfully weighs broad cultural questions against the concerns of the soldiers and community… In a supremely dramatic ending, it is impossible to guess the fate of any of the characters.

Keneally shares his deeply believable and flawed characters' conflicting perspectives sensitively and with great empathy,expressing the full range of humanity in a few hundred pages. He does an extraordinary job of making all his characters compelling and sympathetic, with fully formed back stories, even those whose perspectives are likely to be the most "foreign" to the reader…. Keneally blends history, romance and wartime intrigue in a remarkable piece of historical fiction with a strong sense of place and time.

Once again, Keneally reaches back to the WWII era to stunningly dramatic effect...explores multiple and multifaceted themes of courage, loyalty, empathy, and cultural dissonance.