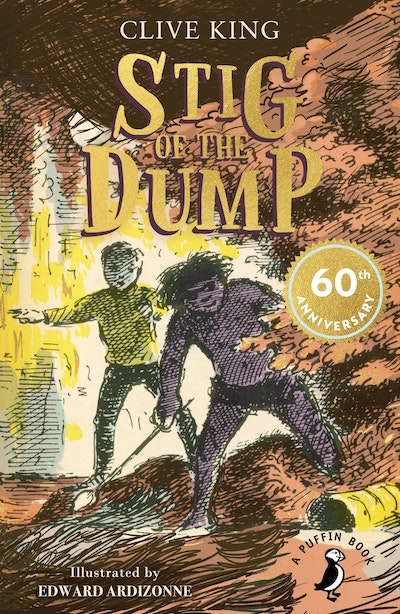 Stig of the Dump

Barney is a solitary little boy, given to wandering off by himself. One day he is lying on the edge of a disused chalk-pit when it gives way and he lands in a sort of cave. Here he meets 'somebody with a lot of shaggy hair and two bright black eyes' wearing a rabbit skin and speaking in grunts. He names him Stig. Of course nobody believes Barney when he tells his family all about Stig, but for Barney cave-man Stig is totally real. They become great friends, learning each others ways and embarking on a series of unforgettable adventures.

David Clive King was born in Richmond, Surrey, England in 1924 but spent most of his childhood in Ash, a small village some 30 miles from London on the Kentish North Downs, where he and his three brothers used to play in a disused chalk pit. He was a boarder at King's School, Rochester at a time when every boy expected to be called up for the armed services in World War Two, and he opted for the Navy. This gave him seagoing experience that took him to the Arctic, Australia and Asia.

He returned with a post-war grant to Downing College, Cambridge, where he read English and Russian. The British Council offered him jobs, mostly concerned with teaching English, in Amsterdam, Belfast, Syria, Beirut, Dhaka and Madras (now Chennai). Many of these places provided settings for the stories he was writing. In 1973, he became a full-time writer, heartened by the growing popularity of his third book, Stig of the Dump. Clive lives in Norfolk with his family.

He comments:
'Places give me ideas for stories, and I like to get the topography exactly right. My travels have also given me an interest in the misunderstanding caused by different languages and backgrounds - though, yes, I do believe we can all get on with each other. I don't really know why Stig of the Dump is so much more popular than my other books. Perhaps it's because it combines my own experience and fantasies with those of my son Charles, in the English countryside we both knew so well.'