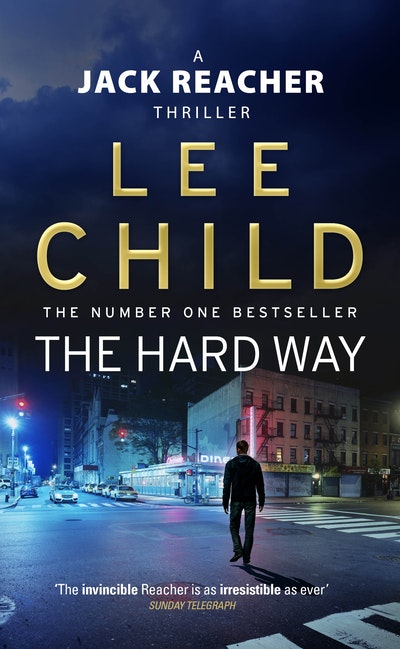 Reacher comes to the UK! Dangerous, sexy and invincible.

"This is storytelling of the highest order: lean, laconic, laced with tension." (Evening Standard)

Jack Reacher is alone, the way he likes it.

He watches a man cross a New York street and drive away in a Mercedes. The car contains $1 million of ransom money. Reacher's job is to make sure it all turns out right - money paid, family safely returned.

But Reacher is in the middle of a nasty little war where nothing is simple.
What started on a busy New York street explodes three thousand miles away, in the sleepy English countryside.

Reacher's going to have to do this one the hard way.

Although the Jack Reacher novels can be read in any order, The Hard Way is 10th in the series.

Praise for The Hard Way

The invincible Reacher is as irresistible as ever.

Child is a consummate thriller writer: his prose is trim but descriptive, his plots believable, fresh and positively airtight, and shows himself a master of misdirection.

Lee Child is often mistaken for a US writer, so skilfully and enthusiastically has he embraced the idiom of the American thriller ... One of the genre's finest practitioners.

'Possibly the British author's best yet.'

'After nine well-received Jack Reacher novels in as many years, Lee Child has established his best-selling series on a firm foundation.Readers can pick up any of the books and have a good idea of what to expect. They know Reacher will perform daring acts of bravery and feats of deductive brilliance.They can expect to find a little humor, a little sex, and the best action scenes in the business.This doesn't mean the author has gown complacent.Quite the contrary.Unlike most series that last this long, Child keeps pushing himself to accomplish new and better things, and it really shows in his 10th novel... his best yet....One of the ways Child has kept his series fresh is by varying not only the plots from book to book, but the style, focus and point of view as well...The Hard Way is a straight-ahead, high-octane thriller that drops the reader down in the middle of the story and keeps you turning the pages until the plot speeds to its thrilling conclusion....one of the most reliable contemporary thriller writers...That level of professionalism has led him to the top of the best-seller charts, and that is clearly where he belongs.'

Nine red-hot books ago, Lee Child concocted the rough, tough Superman of the crime-busting genre, as smart and charismatic as he is unbeatable. And then Mr. Child broke the mold...Reacher returns in this series' 10th installment, "The Hard Way." It's one more labyrinthine story that takes off like a shot: as usual, Mr. Child has you at hello...Child combines brute force and brilliant deduction in the 6-foot-5 person of this footloose, mysterious former military police officer...so clever... superb plotting skills and fondness for unusual story angles...Reacher's command of minuscule details remains sublime...Once again there is disarmingly dry humor in the contrast between Reacher's brawn and his delicate sensibilities. ..And once again a book of Mr. Child's pivots on logistical details that amount to trigonometry, culminating in a prolonged siege enacted with stunning, compass-point precision. Reading Mr. Child is not only a mentally transporting experience but also, at times, a physical one. Don't be surprised to find your hand replicating the finger movements that tip off Reacher to a keypad matrix's four-digit combination.

Reacher, who has long since gained mythical status, is human after all ... This is storytelling of the highest order: lean, laconic, laced with tension.