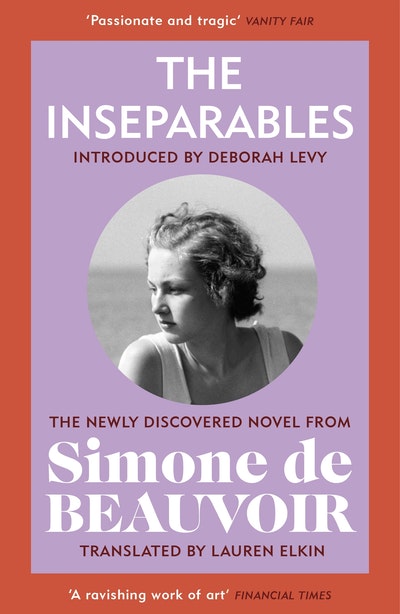 This recently rediscovered novel from the author of The Second Sex is the compulsive story of two close friends growing up and falling apart.

The lost novel from the author of The Second Sex

When Andrée joins her school, Sylvie is immediately fascinated. Andrée is small for her age, but walks with the confidence of an adult. The girls become close. They talk for hours about equality, justice, war and religion; they lose respect for their teachers; they build a world of their own. But as the girls grow into young women, the pressures of society mount, threatening everything.

This novel was never published in Simone de Beauvoir's lifetime. It tells the story of the real-life friendship that shaped one of the most important thinkers and feminists of the twentieth century.

'Slim, elegant, achingly tragic and unaffectedly lovely in its evocation of the closeness between girls - and the pressures that sunder them' Spectator

Praise for The Inseparables

Gorgeously written, intelligent, passionate, and in many ways foreshadows such contemporary works as Elena Ferrante's My Brilliant Friend

A passionate and tragic autobiographical story

Here is an attentive and unintimate love, one that relishes the idea of imagining, but never knowing and never delimiting, the infinite expanses of another person's mind

[An] absorbing novel... The Inseparables is a moving coming-of-age tale about two girls battling with who and what they want to be in 20th-century Paris

In Lauren Elkin's fine translation, the lucid, sculpted prose can flare into starbursts of introspective sensuality... Its focus and restraint show that, even in maturity, Beauvoir could write like a dutiful daughter of the French classics

A succulent taster for those who don't know de Beauvoir's work and, for everyone else, a treat

[The Inseparables] distils subjects that would preoccupy de Beauvoir throughout her career... [and] will introduce some readers to the defining role Lacoin played in de Beauvoir's trailblazing life and career

Translated by Lauren Elkin with exquisite finesse, it utterly conveys both de Beauvoir's heady sensuality and its immediate opposite, observant restraint... The Inseparables is a ravishing work of art

This 'lost' novel by a giant of 20th-century letters reads surprisingly like a French Elena Ferrante... Lauren Elkin's translation is undistractingly smooth

Elegantly translated... The Inseparables...is a rich and rewarding novella

Slim, elegant, achingly tragic and unaffectedly lovely in its evocation of the closeness between girls - and the pressures that sunder them

[The Inseparables] explores the tension between familial duty, religious faith, and the unpredictability of love - both platonic and otherwise - masterfully

A poignant and sensitive portrait of female friendship which acutely captures the agonizing mysteries of intimacy. The translation was gorgeous, and there were lines that absolutely punched me in the gut

[A] rousing novel, elegantly translated by Lauren Elkin, Beauvoir becomes Sylvie, and Zaza is Andrée... the pair's splendour blazes out on every page