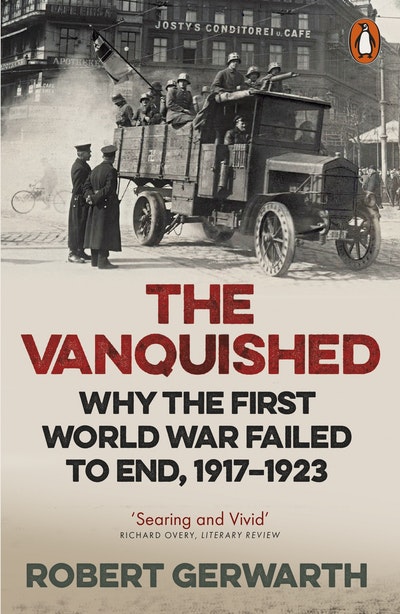 For the Western allies 11 November 1918 has always been a solemn date - the end of fighting which had destroyed a generation, but also a vindication of a terrible sacrifice with the total collapse of the principal enemies, the German Empire, Austria-Hungary and the Ottoman Empire. But for much of the rest of Europe this was a day with no meaning, as a continuing, nightmarish series of conflicts engulfed country after country.

In this highly original and gripping book Robert Gerwarth asks us to think again about the true legacy of the First World War. In large part it was not the fighting on the Western front which proved so ruinous to Europe's future, but the devastating aftermath, as countries on both sides of the original conflict were wrecked by revolution, pogroms, mass expulsions and further major military clashes. If the War itself had in most places been a struggle purely between state-backed soldiers, these new conflicts were about civilians and paramilitaries, and millions of people died across central, eastern, and south-eastern Europe before the USSR and a series of rickety and exhausted small new states came into being. Everywhere there were vengeful people, their lives racked by a murderous sense of injustice, and looking for the opportunity to revenge themselves on enemies real and imaginary. Only a decade later, the rise of the Third Reich and other totalitarian states provided them with the opportunity they had been looking for.

Robert Gerwarth is Professor of Modern History at University College Dublin and Director of its Centre for War Studies. He is the author of The Bismarck Myth and a biography of Reinhard Heydrich. He has studied and taught in the United States, the United Kingdom, Germany and France.