Get to Know Christine Wells

The Wife’s Tale author and lawyer on inspiration and writing.

Christine Wells worked as a corporate lawyer before exchanging contracts and prospectuses for a different kind of fiction. In her novels, she draws on a lifelong love of British history and an abiding fascination for the way laws shape and reflect society. To coincide with the release of her novel The Wife’s Tale, we asked her some questions about inspiration and writing.

What compelled you to write historical fiction?
I’ve been fascinated with history for as long as I can remember. As a child, I used to listen to my father tell me all about great kings and queens and battles and he would explain the true and sometimes gruesome history behind nursery rhymes. I spent some time fascinated with Elizabeth I and read as much as I could about her. Later, my mother took me to see Helen Morse as Lizzie Bennet in the play of Pride and Prejudice and I fell in love with the Regency era, its manners and mores.

More recently, I’ve been delving into legal history and looking at the way the law has traditionally treated women differently from men. The action for criminal conversation that features in The Wife’s Tale is abhorrent to women of today. Basically, a husband could recover a fortune in damages from his wife’s lover because his wife is his chattel and, therefore, the lover was ‘damaging the goods’. How much a husband could recover depended partly on how virtuous, beautiful and accomplished his wife was before she was ‘debauched’. She was literally valued for those qualities, in that a monetary value was placed upon her chastity, just as these days a car has greater value if it has fewer miles on it.

Why the fascination with British history?
My focus is on Britain now because the Australian legal system was born there and I’ve been interested to examine the way laws entrenched moral values of the time. I think, too, that my writing style lends itself to writing British characters. I love the English fondness for eccentrics, understatement and wit. It is also fun to play with the tension between what people feel and what they are allowed to do and say openly in British society of two centuries ago. That inner struggle can be powerful fodder for fiction, particularly if you write primarily about relationships, as I do.

Place plays a critical role in your books. What’s involved in creating authentic historical settings?
Bringing historical settings to life is an act of imaginary re-creation and it is not terribly easy to do. An excellent start for research is to visit the place I write about but very few places still exist that look, smell and sound the same as they did at the time at which I’m writing. I stare for hours at lithographs and paintings to get the visual sense of a place. In the eighteenth century it was quite a popular pastime to write travelogues and include sketches or engravings of different places, and I was lucky enough to find a couple of good travel guides of the Isle of Wight that contained engravings of the estate, Appuldurcombe, on which I based Seagrove.

Diaries, letters or even novels written in the period that are set in the place I’m writing about can be very helpful. When writing fiction, you need the nitty gritty that the history books so often leave out. Even watching a movie or television series with a similar setting can help. While I didn’t rely on the television series Garrow’s Law for any of the research because the demands of good drama so often outweigh the advice of the show’s researcher when it comes to accuracy, immersing myself in the atmosphere of the dingy court rooms and barristers’ chambers in that series did help me create my own court room scenes. And then, of course, London museums like John Soane’s house and the Victoria and Albert can be wonderful sources of inspiration. All of this research, and the experiences and sights, swirls around and hopefully when I write a particular scene I can incorporate setting naturally into it, without writing paragraphs of description.

In The Wife’s Tale you adopt a dual timeline (present-day and eighteenth century). As a writer, what challenges does this complex narrative style present? And how did you address these challenges?
There are the challenges of achieving the right balance between the two timelines and of transitioning smoothly from one to the other. Delany’s memoirs and the report of the trial provided the links between the two. I found the writing software Scrivener to be invaluable in tracking where I was with each scene and which point of view had received enough air-time. The software also enabled me to move scenes around easily. I found it easier to write the eighteenth century part first, and then go back to the present day, rather than writing a bit of each as I went.

‘The day blustered like a member of Parliament’; ‘The ruined hall rose up, grinning like a gap-toothed crone’; ‘We sat like a murder of crows’ – you use simile to great effect in The Wife’s Tale. What passages, sentences or phrases are you most proud of?
Thank you! My favourite passages are always more about the substance than the form – usually they involve a point of high conflict or the transformation of a character. From the point of view of language, these are some of the pieces of which I’m proud:

‘Row upon row of headstones sagged; mouldy angels wept for the loss of their crumbling wings. Crosses lay prone or leaned drunkenly to the side, as if evil had infected the very ground, rejecting the Christian symbol, spewing it forth.’

‘A dark-haired lady sailed into the court room. Like a proud little yacht carving the sea, she slipped through the gathering of gaping fools, the curling ostrich plume in her hat fluttering like an ensign in her wake.’

‘If people who claim to know the fabric of my life wish to pick over my tales for loose threads and wrong stitches, that is their business.’

‘A cloud of butterflies, small and delicate, rose all around her, lifting and whirling above the grass, winging toward the sun. Soft as petals, the wings brushed her cheek, her lips, settled in her hair, made their own tiny breezes that whispered over her skin.’

You’ve successfully incorporated your legal expertise with your passion for English history. Any words of advice for others looking to combine their vocational and creative endeavours?
You have to know what to leave out. Because I was so intimately acquainted with life as a lawyer, my first draft contained things I wanted the reader to know (because that’s really how it’s done!) but they were things the reader didn’t need to know. Even in a big novel like The Wife’s Tale – or perhaps especially in a novel like this – there isn’t room for prose that does not further the story in any significant way. Consequently, there is far less of Liz acting as a lawyer in the novel than I had originally planned. 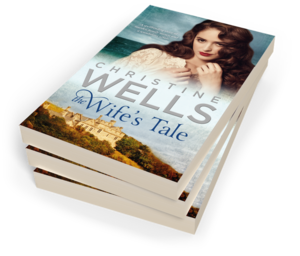 The Wife's Tale is a spellbinding story of murder, family secrets and a scandalous affair.