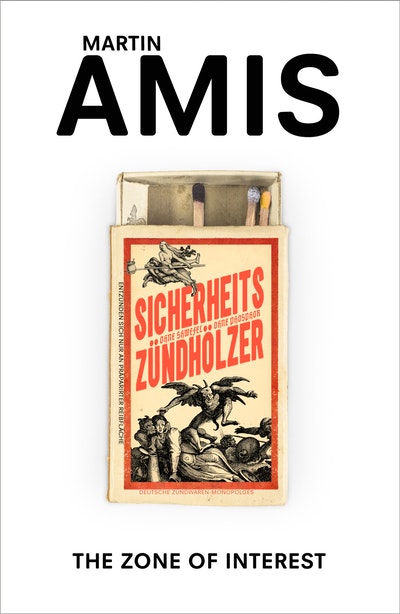 The Zone of Interest

Amidst the horrors of Auschwitz, German officer, Angelus Thomsen, has found love.

But unfortunately for Thomsen, the object of his affection is already married to his camp commandant, Paul Doll.

As Thomsen and Doll’s wife pursue their passion – the gears of Nazi Germany’s Final Solution grinding around them – Doll is riven by suspicion. With his dignity in disrepute and his reputation on the line, Doll must take matters into his own hands and bring order back to the chaos that reigns around him.

Praise for The Zone of Interest

Auschwitz was, in the most essential sense, “unspeakable”. It’s thus something only creative writing can speak about. If you’re Amis, that is…. The most daring novelist of our time.

The Zone of Interest is a tour de force of sheer verbal virtuosity, and a brilliant, celestially upsetting novel inspired by no less than a profound moral curiosity about human beings. It's stunning.

Nasty, timely, as good as anything Amis has written since London Fields… He has done his subject justice.

It is energetic, deeply researched, it is bracingly cruel… It makes the reader squirm and resist and finally laugh… A superb novel, an important one… Where was the career-crowning work that might finally win this author his Booker? Seriously, look no further.

He likes to stamp every sentence with his authority, like the name through a stick of rock, and here he reinvents hell on earth in his distinctively gaudy, insistent, elaborate prose. It is exceptionally brave…. Shakespearean…. It’s exciting; it’s alive; it’s more than slightly mad. As the title suggests, it is dreadfully interesting.

Surely his masterpiece… Intelligent, terrifying and comic… Amis has tackled the biggest questions with imagination and intelligence, and the ultimate strength of this masterly novel is that he knows, and shows, that although there is no answer to the questions Auschwitz poses, we must never stop asking them. Read it, ponder it – revel in it indeed – then read it again.

The novel poses the question that will forever haunt the 20th century: how did the most cultivated nation the Earth had ever seen give way to such infamy, ‘such wild disgrace’?... Amid the horror of the so-called ‘selections’ and ‘aktions’, amid the relentless grind of the Nazi killing machines, humanity somehow survives, and so does comedy.

The Zone of Interest may be his greatest book; it is that good.… It is inventive, awful, testing and, like Picasso’s Guernica, incongruously beautiful. Would that Primo Levi were around to read it.

He writes superbly but with an unusual modesty… He lets his story speak for itself and the result is the best Amis novel in two decades.

A brutish comedy, an occult tale of jealousy and revenge, a farce of thwarted will and missed cues…. He has created a fictional artifice that allows us to see the outline of that which is beyond words.

A grim and bold return to form.

Amis’s staggering linguistic gifts return in full force… The book takes up right up against the limits of language.

Martin Amis isn’t new to the business of turning the horrors of history into fiction, but he has never done so more thoughtfully than in this disquieting novel.

A difficult, troubling read, and easily Amis’ most successful new release for a decade.

Arguably his best…. A must-read

The strength of this masterly novel is that it illuminates without pretending to explicate.

It’s signature Amis at his most inventive, and it is through…inspired and irreverent fluency that his dead-serious purpose is realized.

Most fiction would break under the weight of so much self-reflection, but The Zone of Interest does not even bend... Deft, ironic and horribly funny... A brilliantly believable account of an episode which is beyond belief.

The Zone of Interest succeeds because in it Amis is seriously funny - that is to say, funny for serious purposes.

It’s a brilliant feat of imagination and chutzpah.

Is the Holocaust a fit subject for fiction? … The only proper response is to read this remarkable, deeply disturbing and quite original novel.

Martin Amis’s The Zone of Interest achieved the near impossible, confounding his detractors with this horrifying glimpse into the heard of Nazi darkness.

The Zone of Interest is Amis at his boldest and best.

What would be otherwise be light entertainment…becomes sinister and strange, warped by the enormous atrocities happening just offstage.

It is always hard to read factual material about the Holocaust but in fiction Amis has shined a light into this darkness which offers no answers but is still profoundly moving.

It was very, very good.

I think everyone should read it – it is so horrific.

A well-received return to form

Astonishingly bold novel… [It] is Amis’s best work in years