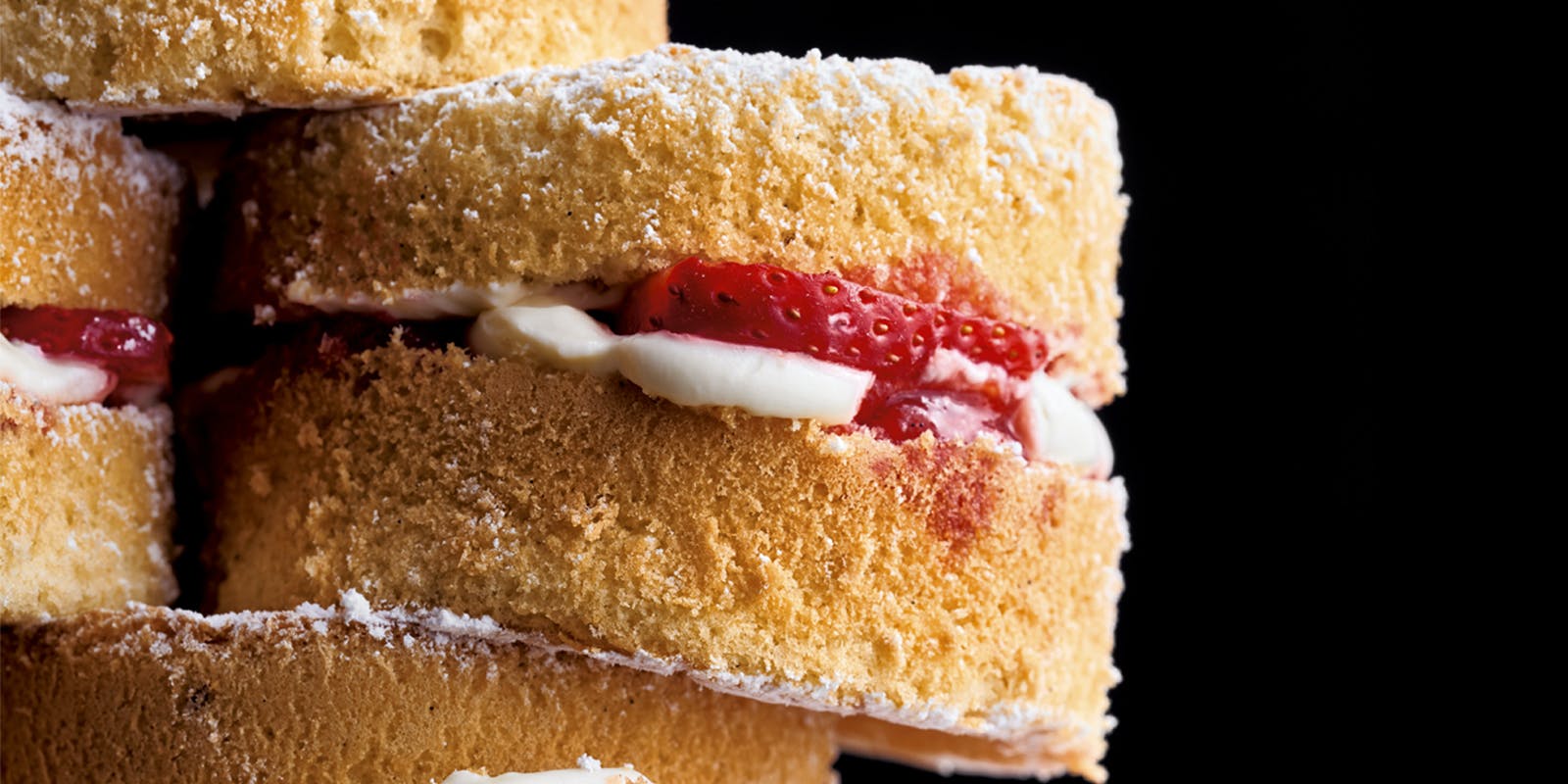 Nothing says ‘summer garden party’ more than this: the light-as-air sponge, the seasonally sweet strawberries, the white chocolate cream . . . Add a freshly mown lawn and a cup of tea and you’re there.

The secret to the sponge – which is light as air, but also rich and buttery – is the reliance on air being whipped into the eggs as the raising agent, rather than chemical leaveners. Melted butter is then trickled into the cake batter and folded in for extra richness. All this requires a deft and light hand (and a bit of elbow grease to begin with), but the result is a deliciously versatile sponge for your repertoire. There’s something a little bit magic about making a perfect genoise sponge. Behind the magic, though, there’s quite a lot of method. None of it is complicated; all of it is important.

To make the white chocolate cream, place the chocolate in a medium bowl and set aside. Put the cream in a small, heavy-based saucepan and place over a medium-low heat. Cook until it is just starting to simmer, then pour the hot cream over the chocolate. Leave to sit for 3 minutes, for the chocolate to soften, then stir gently until the chocolate is melted and fully combined. Cover with cling film and refrigerate for 1 hour until completely cold.

To cook the strawberries, place the strawberries, sugar and lemon juice in a small saucepan (along with the empty vanilla pod) and mix well. Bring to the boil over a medium heat and cook for 4–5 minutes, stirring regularly, until the sugar has melted and the mixture has thickened. Remove from the heat and set aside to cool.

Put enough water into a medium saucepan so that it rises about 5cm up the sides: you want the bowl from your electric mixer to be able to fit in the saucepan and sit over the water without actually touching it. Bring the water to a boil, then reduce to a simmer.

To make the sponge, place the eggs, sugar, vanilla and lemon zest in the bowl of an electric mixer and place the bowl on top of the saucepan of simmering water, making sure (again) that the bottom of the bowl is not touching the water. Whisk continuously by hand for about 5 minutes, until the mixture is frothy, creamy and warm. Remove the bowl and place it on the electric mixer with the whisk attachment in place. Whisk on a high speed until the mixture has tripled in volume and is no longer warm.

While the mix is beating in the mixer, melt the butter and set aside to cool. Combine the flour and salt in a bowl and sift it twice. When the egg mixture has tripled in volume and is no longer warm, sift half the flour (yes, a third sift!) directly over the mixture and gently fold it in with a large rubber spatula. Sift the remaining flour over the mixture and fold in again. Now drizzle the cooled, melted butter down the sides of the bowl. Fold in gently and swiftly to incorporate.

Spoon the mixture into the cake rings – it should be filled two-thirds of the way up the sides – and bake for 15–18 minutes (or 25 minutes if baking one large cake), or until the cakes are a light golden brown and the sponge springs back when lightly pressed in the middle. Remove from the oven and set aside to cool for 20 minutes, in the rings, before using a small knife to remove them: take a bit of care here, to prevent the cakes tearing or sticking to the sides. Transfer to a wire rack to cool completely.

When ready to assemble, place the white chocolate cream in the bowl of an electric mixer with the whisk attachment in place. Add the extra 120ml cream and whip on a medium-high speed for about 30 seconds until combined and thick. It should just hold on the whisk – it can over-whip very quickly, so be careful.

Cut the cakes horizontally across the centre and spread the cooked strawberries on the cut side of the bottom piece (discard the vanilla pod). Spoon half of the white chocolate cream on top, followed by the sliced strawberries, followed by the remaining white chocolate cream. Finish with the top half of the sponge. If you have made one large cake, take care when slicing it in half; you’ll need to support it underneath when lifting it back on top of the cream and strawberries. If you have a cake lifter or jumbo cookie spatula, now is the time to use it! Dust with icing sugar and serve.

We have used 8cm wide cake rings here. But if you don’t have eight of these, make one large cake in a 20cm round springform cake tin instead

Once assembled, the cakes should be eaten on the same day, and the closer to assembly the better, as cream does not like to sit around for too long.

The sponge is best made on the day it’s served, but can be made a day ahead, if necessary, and kept in an airtight container. It can also be frozen, wrapped in cling film, for up to a month.

An original collection of over 110 recipes for sweets, bakes and desserts from the renowned food writer and chef, Yotam Ottolenghi.

An utterly buttery and decadent dessert that feels the very opposite of 'free-from'.