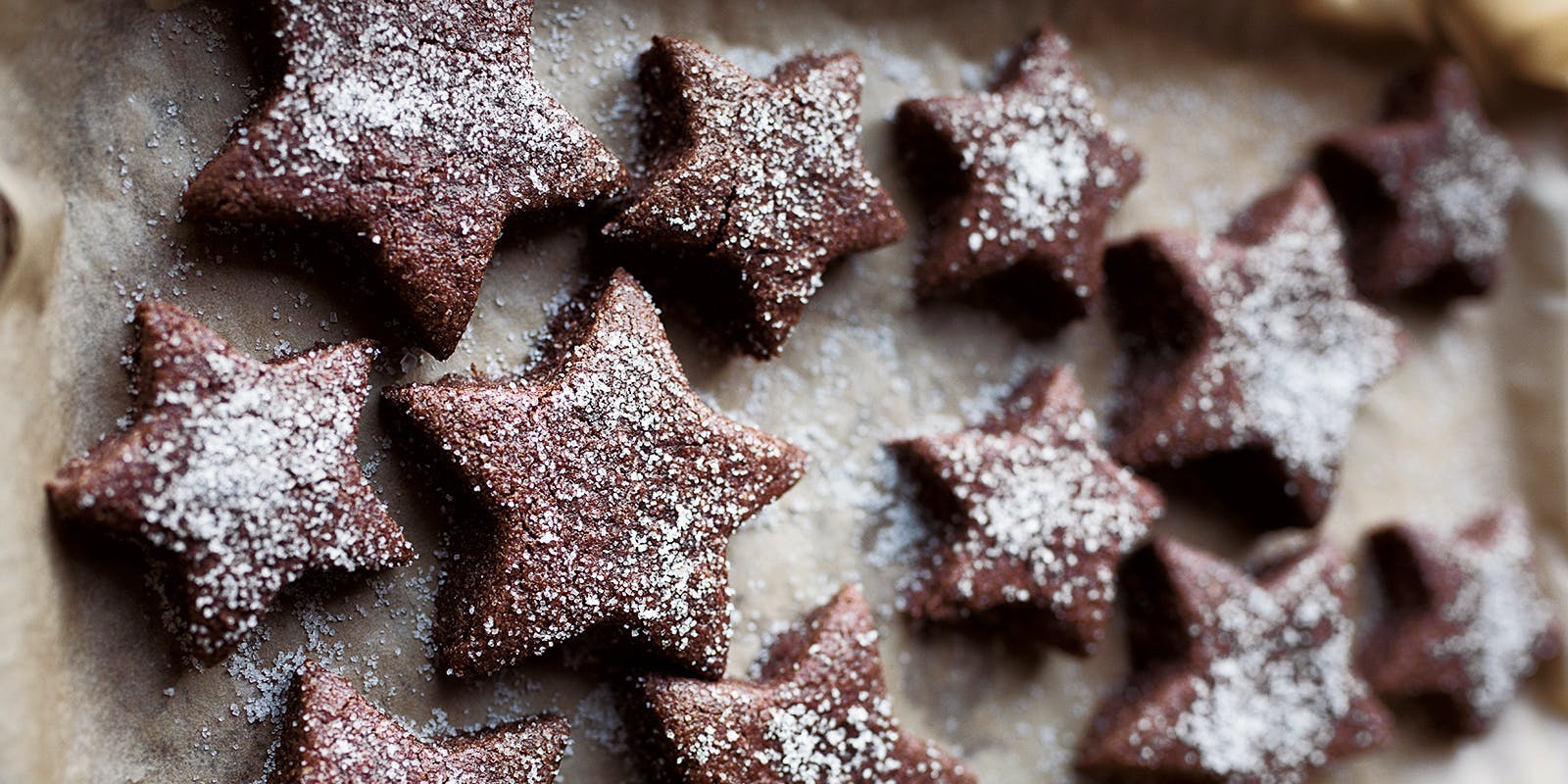 Anyone from Switzerland will tell you that these should only be made with cinnamon and cloves and only be baked and eaten at Christmas. Having played around with the spice mix, and baked and eaten them happily throughout the year, I would make the case for the rules for this chewy brownie-like (and gluten-free) biscuit to be extended. Swiss-born Cornelia Staeubli, through whom nearly all decisions at Ottolenghi have to pass, would firmly disagree! It’s true, though, that they’re particularly at home when things are festive, so I’ve made them into stars to play the game.

Either way, these keep for 5 days in a sealed container. The dough can also be frozen (either when shaped into a ball or cut into cookie shapes) for up to a month. If you bake from frozen, just add another minute or two to the cooking time.

Place the almonds, granulated sugar, icing sugar, cocoa powder, orange zest, Chinese 5-spice and salt in the bowl of a free-standing mixer, with the dough hook in place. Mix on a medium speed, until combined. With the mixer still working, add the egg whites and vanilla and continue to mix for 1–2 minutes, until the dough comes together into a ball. Tip the dough out on a clean surface, shape into a flat disc about 3cm thick and wrap in cling film. Place in the fridge for about an hour, to rest.

Cut out two pieces of parchment paper, 40 x 40cm. Unwrap the dough from its cling film, place in the middle of the two sheets of paper and roll out to form a circle about 22cm wide and 1½cm thick. Using a 7cm wide star-shaped pastry cutter (or whichever pastry cutter you are using), cut out the stars and place on a large parchment-lined baking tray. Press together the scraps of dough and roll out again, cutting out more stars as before. Continue until all the dough has been used, then sprinkle with the 10g of granulated sugar.

Bake for 12 minutes, until the bottoms are slightly crisp and the middles are soft and gooey. Remove from the oven and set aside to cool.

A fresh and flavourful  starter dish from Plenty More by Yotam Ottolenghi.

Try this enduring fan favourite recipe from Ottolenghi: the Cookbook.

In an homage to everything SIMPLE, Yotam Ottolenghi shares his simple pleasures.

This cake is a must for speculoos biscuit lovers.