Will my job be taken by a robot?

An insightful essay about the future of work from The Big Questions.

The automation of work

When thinking about automation, many people imagine a high-tech robot taking over every aspect of their job. The reality, however, is that robotics makes up a very small part of the automation picture. Job automation also includes algorithms, smartphone apps, artificial intelligence, computer software, driverless technology, drones, the Internet of Things, quantum computing, and more. Most of it is possible thanks to exponential leaps in computing power. Today, new disruptions to traditional modes of production, apparent through advances in 3D printing, nanotechnology, biotechnology and the rapid combination of existing technology, amount to a fourth industrial revolution.1 Technology has always changed society, and this new wave of automation has begun — and will continue — to disrupt many occupations and industries.

Automation of a person’s job may be considered a raw competition between technology and human labour. For example, a driverless car or truck could make the driver of a taxi or truck redundant in some settings. However, automation can also compete with human labour indirectly by being slower but more cost-effective and consistent. For example, the Baxter and Sawyer robots from Rethink Robotics are inexpensive, multipurpose devices that can be easily programmed to attend to a range of tasks with their mechanical arms, in stark contrast to previously difficult and expensive setups for automation that you could see in an automated factory, lights-out facility or a robotic clean-room. General-purpose robotics like Baxter can be implemented within existing workplace structures, without the need for completely rebuilding a workspace. Robots from Boston Dynamics give clues as to the speed at which robotics are currently capable of moving, even though at this point they have more of a military application.2

Robots like this could work 24 hours a day, seven days a week without a break. A robot cannot injure itself, eliminating health and safety concerns. It requires no sick leave, annual leave, KiwiSaver contributions, ACC levies or other overheads. Its running cost is far less than the minimum wage. General-purpose robotics like this are in their early development, and while they are agonisingly slow in their current form compared to performing manual labour against a human, the break-even point is near. Comparing our current smart phones with a Nokia from the mid-2000s highlights how far technology has come in a short timeframe. It is not difficult to imagine how automation will advance during the decades to come, and how the costs of these units will continue to fall while wages, and worker overheads, continue to rise.

In popular wisdom it is the unskilled jobs that are most likely to be automated. However, when the cost of labour is high, the incentive to automate that labour is also high. As a result, many of the skilled professions and service-focused roles could be targeted for automation; these include technical writers, human resources assistants, medical and clinical laboratory technologists, insurance sales agents, retail salespersons, accountants and auditors.3

Other industries affected include those with repetitive activities within jobs, such as the construction, retail and food service industries, as jobs that are increasingly specialised and fragmented are easier to automate. When the complexity of a job is reduced and the repetition within the work is increased, that job tends to become more scripted; that is to say, the human employee (say, a fast-food worker) has to follow a clear set of tasks to complete their job to specification. Some of the roles that are at high risk of replacement (at a probability of 90 per cent and above) include telemarketers, data-entry workers, insurance underwriters, driver/sales workers, farm labour contractors, meat/poultry/fish cutters and trimmers, automotive body repairers and HR assistants, to name a few.4

Technology is more likely to change employment when part of a job is automated, which could create a net loss in the total employees needed. For example, automated accounting and data entry can mean some employees find the work requirements in their jobs decrease once the repetitive task of entering, ordering and checking data is taken over by automation. This may result, for example, in fewer accountants or administrators. Yet automating repetitive tasks may open workers’ daily timetables to more creative and customer-focused roles, potentially leading to a change in the employee’s role, rather than a loss of employment.

Technological redundancy through automation can also be outsourced to the consumer. A clear example is the development of self-checkouts; here, a sophisticated robot with fine motor skills to scan the products or take an order is not required: a touch-screen computer is simply turned outward towards the consumer. Other examples include online forms replacing call-centre workers, and banking apps taking the place of high-street branches and tellers. When a consumer completes a task an employee once did, it is known as ‘shadow work’. The power of smart phones is already disrupting and changing the very nature of work and how we consume goods and services.

Disruption of an entire industry can also lead to a highly changeable time for employees. Consider, for instance, improvements in the production (and taste) of meatless meats, lab-grown meats and synthetic milk. Our agribusiness sector exports 95 per cent of its products to over 100 countries and feeds up to 40 million people.5 Even if you don’t (or won’t) eat lab-grown meat, there are other consumers who will — and many of these consumers will be located in our export markets. It is also possible that these products will cost less and be more environmentally friendly, constituting a more ethical choice. This type of disruption may eliminate some of the labour between farm gate and dinner plate. We will also see more automation in fruit picking and packing, along with more automated tractors and farm equipment, such as sensors in the soil and drones to deliver pesticides.6

Research suggests that 47 per cent of occupations within the United States could be at risk of automation, from an assessment of 702 occupations,7 while another report estimates the OECD average to be as high as 57 per cent.8 And a report by the Chartered Accountants Australia and New Zealand suggests that 46 per cent of jobs within New Zealand could undergo automation over the next two decades.9 It was also found that in 2016, 40 per cent of New Zealand businesses were looking at automating processes.10

While it is easy to form a negative picture of the future in some industries, it is important to note that mass unemployment as a result of automation should not be seen as a foregone conclusion. The most difficult jobs to automate are those in the areas of science, technology, engineering and mathematics (STEM) — or those, according to commentator Olivia Berlin, ‘that call for creativity or the yet-to-be replicated “human touch” ’. She quotes the World Economic Forum, which suggested that ‘persuasion, emotional intelligence and teaching others will be in higher demand across industries . . . [in addition to] character, dependability and perseverance’.14 Positions facing a low risk of automation (probability of less than 3 per cent) include recreational therapists, emergency management directors, occupational therapists, physicians and surgeons, registered nurses, veterinarians and mechanical engineers.15 In a 2014 poll, researchers found that fewer than half (48 per cent) of nearly 2000 experts believed that robotics and AI would negatively affect the human workforce by 2025. The majority, albeit a slender one, predicted a positive future for us. 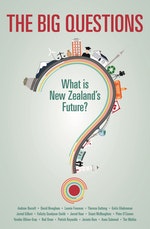 Just where is New Zealand headed? How will our future shape up? Will we be okay?