Setting new habits – or breaking old ones – is hard! If it was easy, the world would be full of happy, healthy people who regularly put money in their retirement account, brushed their teeth twice a day and made the bed every morning.

But despite it being hard, there are plenty of people around who have successfully changed what they do – and sustained that change. Some of them might have been forced to change, but for many others it will have been a choice. If you’re making a choice to make a change, here are some tips that will make it a lot easier for you to stick to your new habits.

Make sure you want to change

If you don’t have a strong ‘why’ – a strong reason for changing – then you don’t have anything to fall back on when things get tough. Take a look at page 27 for ideas about finding your ‘why’ for change. Make sure that it’s you who wants to change, too. If you’re trying to make a change because someone else thinks you should, your chances of success are so much lower.

And make sure that the goal that you’re setting is realistic – if your goal is to never eat sugar again but you know that sweet treats give you a lot of pleasure, then you’re probably not ready to commit to that goal. If you feel the need for a big, final blow-out before you start your change, then maybe your goal isn’t realistic. If you’ve decided to give up alcohol to improve your health but before you do that you’re going to have a massive binge, then it’s quite likely that you don’t really want to give up alcohol at all, and cutting down would be a better goal.

Don’t just jump in and start immediately, tempting though that might be. You need to set up your environment so that it supports your goal. Decide that you’re going to change, and what you’re going to do, and then set your start date for a week or so in the future. This gives you time to get used to the idea, and it allows you to plan how you’re going to tackle your goal. You’ll have time to work out whether you can get up half an hour earlier to go for a walk, or if you can prepare extra dinner so that you’ve got leftovers to take in for lunch the next day.

Change one habit at a time

How many times have you made a bunch of New Year’s resolutions and kept them for . . . oh, three days or so? Plenty? We all do it. On the first day of January, a lot of us decide we’re going to revolutionise our lives – never eat junk food again, stop taking sugar in our tea or coffee, run every day, give up smoking, stop drinking, etc. And pretty much everyone who starts like this is on a fast-track to failure. It’s impossible to change so much in so little time, because it takes willpower and attention. We only have a finite amount of willpower, and there’s rarely enough to allow us to change everything.

Instead, pick just one thing to change. Just one. It might be to walk or run for 20 minutes every day. Maybe you want to try going to bed half an hour earlier so that you can get up 30 minutes earlier and do some exercise. Or perhaps you want to have a high-protein breakfast every day. Or to halve the amount of rice you eat. Whatever it is, make sure that there is just one thing you’re trying to change.

One of the biggest changes we’ve seen in the past couple of decades is the arrival of the internet. But that wasn’t built overnight, you know. It started out as a few ugly pages – and just look at it now!

You can apply exactly the same idea to any change you want to make: start small, and gradually build up over time. So, if your change is to add exercise, go small to start with. If you can only do 5 minutes to start with, that’s fine – just make sure you increase the time gradually so that you get to your goal. If you want to develop a healthier diet, try tackling just one meal a week to start with, then extend that to two meals the following week, etc.

Starting small makes it easy to achieve your goal to start with – this means that you get a good buzz from your accomplishments, and that way you’re more likely to keep going.

OK, so there’s a voice inside your head saying that you’re going to change. The problem is that only you can hear that voice, and what it has to say is transient and intangible. Worse still, there’s another voice saying ‘Nah, can’t be bothered.’ That voice is easier to listen to – because change is hard and it’s human nature to choose the easy option and do what we’ve always done.

So, if you want to be successful at change and to stay on track, then you need an external way of recording your success. There are plenty of options here – pick one that works for you. You could keep a daily journal that you write in, you could have a ‘healthy habits’ buddy who you talk to every day, you could use an app to record your progress, you could put a big chalkboard up in the kitchen and tick off every day that you’ve followed your new habit. It doesn’t matter which technique you use, as long as it feels right for you and you do it every day, ideally at the end of the day. If you don’t have some sort of system like this to keep you accountable, you’ll find that all of a sudden a week has gone by and you’ve lost the habit. 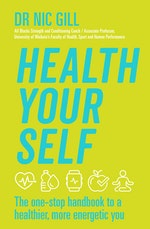 Health Your Self Dr Nic Gill

Take control of your health and wellbeing with the book that was written with you in mind.