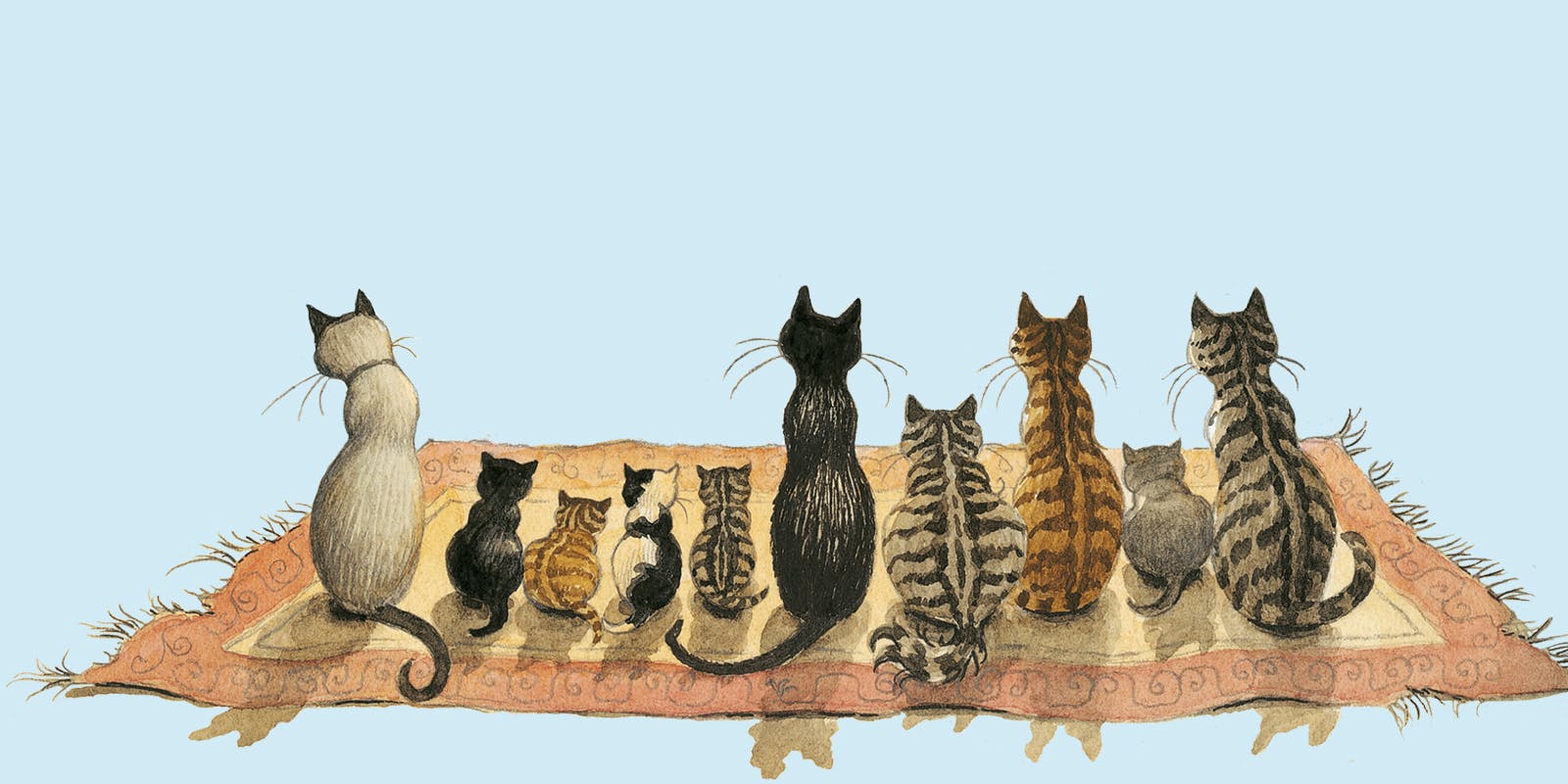 This slender, blacker than black, yellow-eyed cat has a kink at the end of his very long tail. Surely such an attractive feline would have some high-class Oriental blood in his ancestry? Certainly, his warbling wail and love of night singing suggests it. During the daylight hours Slinky Malinki is playful and adventurous, teaming up with friends such as Stickybeak Syd. He is a friendly, cheeky cat – in most ways a cat owner’s dream. But at night he has another secret side, which casts him as a cat owner’s nightmare. Friendly becomes fiendish, slinky becomes sly. He has even been known to steal . . . Slinky Malinki is often victimised by Hairy Maclary, who loves to chase cats, and he would certainly avoid Hairy Maclary and his gang if he were able.

Unquestionably the toughest Tom in town, this huge, dusty black, yellow-eyed cat of indefinable parentage has notched up many battles on the ends of his ears. A great survivor and warrior, Scarface Claw comes and goes around the neighbourhood as he pleases. He has earned a healthy respect from Hairy Maclary and his gang as all know that Scarface fears no one, no cat, dog or person. However, he’s had to accept human help at times, like when he became stuck up a tree, or trapped on the roof of a car! A loner, he minds his own business, although he can’t resist joining in when the other cats gather for a bit of midnight caterwaul symphony. But never fear – Scarface has a knack of making sure he’s not left out in the cold!

A striking marmalade tabby, Butterball Brown is very proud of his appearance – possibly because doting Grandma always tells him that he’s handsome. While he likes to keep himself neat, he’s certainly not a lazy cat and never misses a night-time adventure with his friends. During the day, he’s often found grooming himself in a sunny, open spot, positioned so that he’s viewed to maximum advantage. He also likes to lurk in the shade of a bush or up in a tree, his owlish eyes glowing. But even when he’s napping, he’ll keep an eye half open – just in case he misses out on some action.

Everywhere Greywacke Jones goes, the world seems huge in comparison to her. Flowers tower over this wide-eyed, teensy grey kitten. She hones her skills by hunting bees, as they’re more to her scale. Unfortunately Greywacke Jones’s size makes her an easy target for hustlers such as Scarface Claw and on occasion she’s been chased up trees by noisy, scruffy, hairy dogs. One day she’ll be a fully grown cat and not so easily pushed around. But for now, when she’s out and about, she prefers to have the protection of feistier friends such as Butterball Brown and Pimpernel Pugh.

Grizzly MacDuff has tigerish markings and an equally tigerish temper. When he’s upset, his normally sleek tail fur stands on end, resembling a bottlebrush. Grizzly MacDuff is also an impulsive cat and perhaps this is the reason that he is a frequent visitor at the Vet’s. He makes no secret of the fact that he despises the undignified poking and prodding and will take his first opportunity to escape. However, being accident prone doesn’t seem to stop him from putting his tail at risk again and again – he’ll always join in with Slinky Malinki and the other cats on a moonlit prowl.

No door, wall, fence or basket can contain these cheeky and adventure-seeking youngsters from Parkinson Place. The quartet of escape artists roams the neighbourhood at all hours. Easily keeping up with the most energetic adult cats, they incite each other to greater and greater feats of daring. While each kitten looks very different to his or her siblings, the four are always together in a set, playing and tumbling and scuffling in a blur
of activity. Maybe that’s the reason why we’ve never discovered their individual names?

This elegant cream-coloured Siamese wears a collar which impeccably matches her bright blue eyes and is adorned with a delicate tinkling bell. Along with Pimpernel’s elevated breeding, being the Minister’s cat gives her a certain status. She is well aware of the impression she makes – she has even won a ribbon
at the local cat show for the ‘Snootiest Cat’. But her dignity melts away in the presence of a ball of wool (or a ball of any kind) and in the next moment she’s pouncing and scrabbling about like a kitten. With her sharp intelligence and alert senses she’s always an asset on the cats’ night-time outings, where she’s the first to spot and spit at an imposter.

A beautiful fluffy bombshell of a cat with a shy and refined personality, in the daytime Mushroom Magee can usually be found curled up somewhere sunny, such as atop a warm window ledge – just as long as she’s well out of range of pestering dogs. But she enjoys a night out as much as any cat, and is often found promenading in the company of her best friend, Pimpernel Pugh. (These two consider themselves ladies of high society.) And should an occasion arise in which Mushroom’s gentle nature is provoked, she proves herself amongst the fiercest of felines. 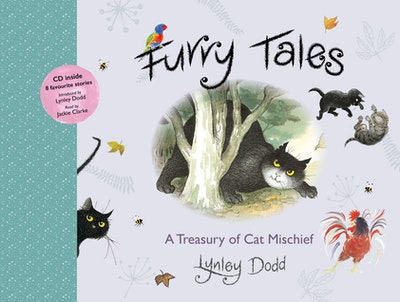 Furry Tales: A Treasury of Cat Mischief is a delightful collection of Lynley Dodd's best loved stories of cat escapades, with an accompanying audio CD. It is for all cat lovers, young and old, and fans of Hairy Maclary and Friends

A new colouring in page every day!

Parents: Click here for 10 minutes of peace. (You're welcome).

Out of the gate and off for a walk went Hairy Maclary from Donaldson's Dairy...

You can even download everything you need to throw your own frolicking Hairy Maclary birthday party!

Looking to keep the kids occupied this afternoon? Why not download our Hairy Maclary and Friends colouring sheet?