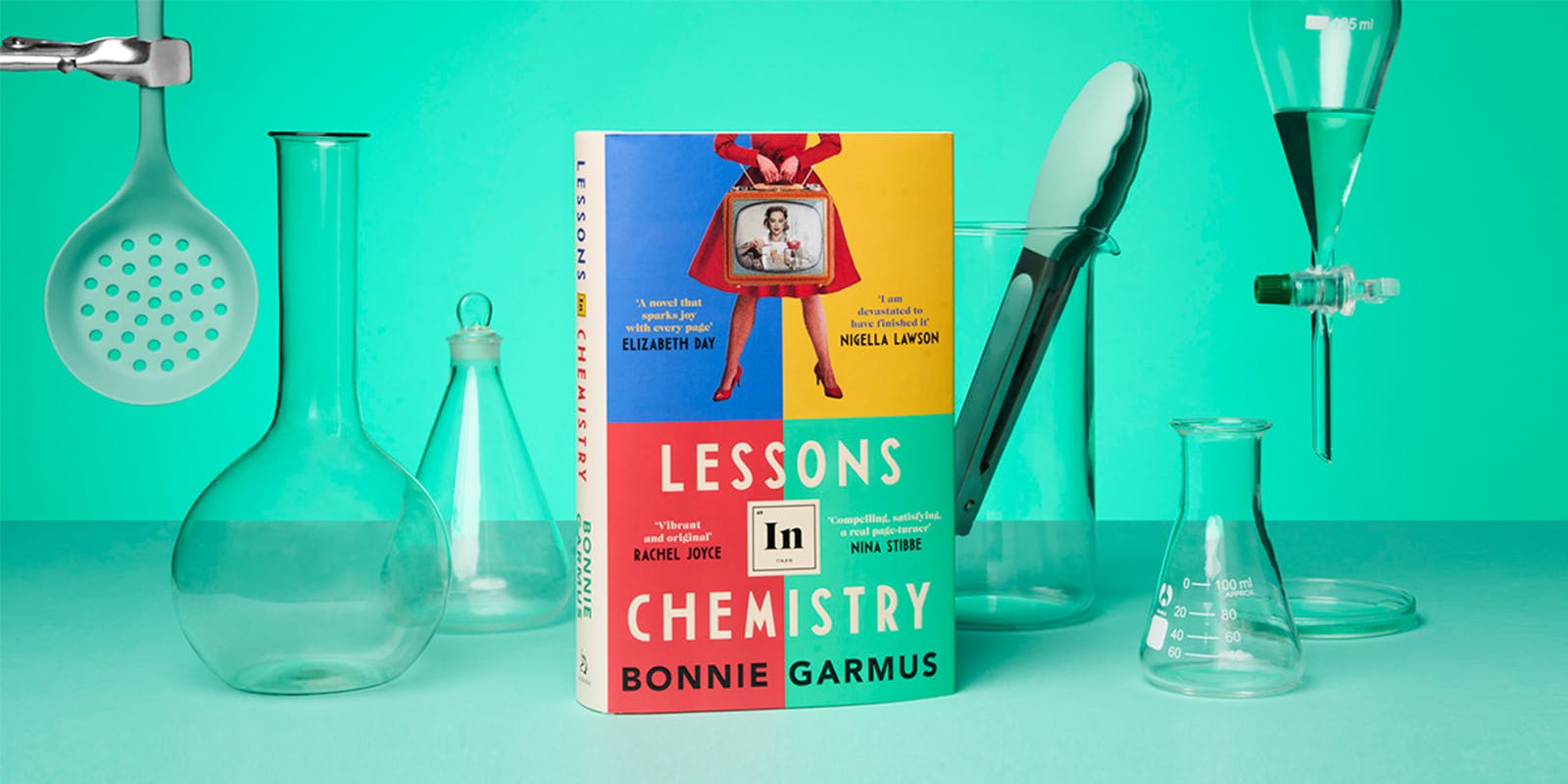 Elizabeth Zott got her start a long time ago in a completely different novel. She was a minor character back then, first appearing in a scene where her grown daughter, Madeline, is standing in a kitchen of a dilapidated house when her six-year-old finds a cookbook stashed in a corner. The cookbook is Supper at Six and the child’s grandmother, a grim-looking Elizabeth Zott, stares back from the cover.

Although I abandoned that first book, that cover stuck with me for years. And when I sat down to write a new book, it was Elizabeth Zott who sat down beside me.

I knew a few things about her right away: that she was a gifted chemist; that she’d known great sorrow; and that she had a hit TV cooking show which she always maintained was actually a science show. I also knew she had a young daughter whom she saw, on her best days, as an anthropological wonder. And on her worst days, as a misfit, just like herself.

As it turns out, it is her misfit nature—her inability to fit in—that makes her a stand-out. Because when she presents an undiluted version of what she thinks—all the while wielding a fourteen-inch chef’s knife—she becomes impossible not to watch.

From the very beginning, I liked writing a character who knew who she was; someone who didn’t constantly question herself or spend hours wondering what she should be. Sometimes I’d find myself marveling at her confidence: she doesn’t agonize—she acts. But with that kind of confidence comes a sort of blindness, and naturally that gets her in trouble. People react to her with a mixture of astonishment, frustration, humor, envy. Elizabeth does not have the time or inclination to people-please. She also has no room for avoidance, manipulation, lies, and fakery. Seems like a lot of extra work. Why not just state facts? Why not just tell it like it is?

There were days when I would find myself saying out loud, “You really want to say that, Zott? You really want to go there?” And she’d say, “What? Why not?” She has this streak of cluelessness mixed with a kind of fed-up impatience that I loved writing. She treats gender stereotypes as some sort of clerical error; a momentary lapse in judgment, certain that once everyone rereads their Margaret Meads and Charles Darwins, we’ll all be back on track. She approaches motherhood as an experiment—there will be failures, accidents, falls, sure—but think of the data. She accepts limits for no one—her neighbor, her boss, her dog. But she also is mired in a deep well of depression that comes not only from the tragic events in her life, but from the one thing she abhors more than anything: being misunderstood.

More than anything, she wants to be judged on her contributions. But as a woman, she’s judged on her attractiveness. I made her beautiful for a reason: to show what a burden beauty is. She isn’t taken seriously because of the way she looks, yet gets an enviable job almost entirely based on the same. Worse, her beauty comes from someone she despises—her father, a second-rate performer she’s determined not to emulate.

But what does a cooking show host do if not perform?

Teach, Elizabeth would insist. Preach, her friend Wakely might correct.

And Wakely is right. Because Elizabeth’s recipes aren’t just about food. They’re about life—politics, faith, responsibility, myth, culture, society—the very things that feed our bodies and our minds. And she’s determined that we recognize and cut out all the rotten parts; dispose of the poisons of racism, misogyny, religious zealotry, jealousy, and live up to our dynamic, ever-changing systems—our chemistries. Chemistry, she tells her audience, is change, and change is courage. Don’t be afraid of change, she instructs. Put it on a plate. Serve it for dinner.

And despite all the hurdles—her foes at Hastings Research Institute, her advisor at UCLA, her sexist boss at KCTV, her picketers, even her audience’s sometimes uncomfortable reactions, she refuses to back down. She sets out to teach a nation of overlooked housewives what they’re made of—at a molecular level. And suddenly a nation of women can’t get enough, and men can’t help but listen. And it’s all because Elizabeth Zott takes herself seriously. And in doing so, dares us to do the same.

'Mad Men' didn't turn scientists into unlikely TV stars. But if they did ... The blockbuster of 2022, set in 1960s California, introducing the unique and unforgettable Elizabeth Zott.