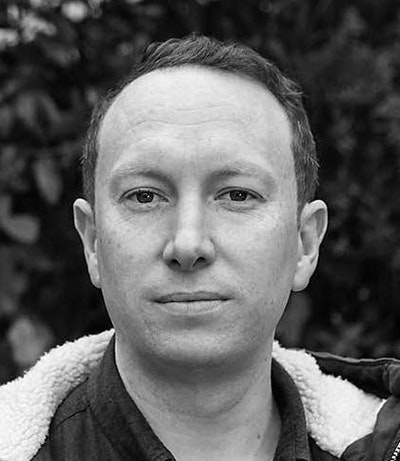 Glen was thinking about infinity. Not the concept so much as the symbol, ∞. He felt as if he was at the point where the two O’s came together. The nexus between growing up and growing old, coming and going. Until now the process of aging had seemed infinite. But infinity was just a reclining figure eight. Just another integer. He saw that now.

I am twenty-one, he thought. Perhaps this is only the first crossroads of many in the chain of my life. No comfort there.

He tried curling his toes but his sensible shoes hugged tight.

A new wave of lost-youth cold snaps. A five-minute span playing Smurfs by himself before being taken to the hospital to see his new baby brother. The car-crash hit of the day he drove past the cemetery and wanted to stop and visit his grandfather’s plot, but didn’t.

Just memories. A mix of water and sugar, like Raro. A thousand plugs fighting for a power point, and struggling to separate from the coiled mass of cords seeping away glacially.

He ran his right thumbnail under the nail of his left index finger, then knocked the collected grime from the edge of the nail with his other thumb. He asked himself if he could recall a specific time he had performed this act before. A time, a place, a song in the background? No. But he had done this a thousand times — all had melded into one. An amputated memory. A sense more than a memory. He wondered if these were the only permanent memories.

I have been to Auckland.

I have eaten lamb with mint sauce.

I have farted in public.

A breath and the first steps towards articulating his deep woundedness. At first it was only words. Home. Family. Work. Hardly a haemorrhage of original themes. He was home for Christmas, home from Melbourne, home from his first full-time job, home after five months away. Five months of acclimatising, of no friends yet but working on it, of The Price is Right and Bert’s Family Feud. He had been looking forward to comfy old En-Zed, but there were friends who didn’t make the effort to see him at New Year’s in Wellington, then promised to come up to Palmy, but didn’t. His younger brother, Warren, was house-sitting and chose to spend the time with his girlfriend rather than with Glen. Skipping town and breaking Warren’s idol worship five months previous, he’d felt pangs of cruelty. Now, being snubbed by his brother, he felt the idolater.

Worse than the snubs were the smotherings. The way his mother sought him out when he was in a different room. The way he absolutely must hug his grandmother on arrival and departure. Where had all this affection suddenly come from? Though all the hugging was slightly alien, it wasn’t the act that really bothered him: it was the thought that if he had not left, there would still be no hugs. Was his family finally trying to become a family rather than a set of subsidiaries, bound by fiscal responsibility to appear at certain prearranged meetings? If leaving put a value on his head — made him a huggable commodity — what would death do?

For the first time in four years he thought of suicide.

As a teenager, he’d had flushes of sadness. Great upswellings of distaste for his life. Times when he would wrap the pull-cord for the lounge curtains around his neck (acne then, scars now) and lean forward, researching what it would take to hang himself. Rehearsing suicide. He kept putting off learning to drive because he could not be sure he wouldn’t yank himself into the oncoming lane. His great wounding shyness almost defeated him and he chose to bear it all himself. But tied up with this shyness was a form of pride. He knew he was smart — that he emanated this smartness — and had noticed a certain uncomfortable reverence others paid him. This pride often held his comments back — perhaps the words would not meet his standards — so he retired to the corners of the classroom.

And though this pride had a lot to answer for in getting Glen into his lonely and over-thought quagmire, it wouldn’t let him stop kicking.

But now he was sliding back in.

Amidst this rush of thoughts, a sentence articulated itself.

He was in the lounge of his house-sitting brother, so it was his auntie’s lounge, really. In Australia they felt the need to call this a lounge-room, never just a lounge. He had tried to convince workmates it was inefficient — ‘You don’t say kitchen-room’ — but no one was ever prepared to get into semantics with him. His brother and his new girlfriend — her name was Kelly with an ‘i’ or Katie with a ‘y’, something abnormal to match her enormous eyes — were sitting on the couch and Glen was on the reclining chair which could swivel three-sixty degrees like an owl’s head. They were watching E! and he decided he had seen one too many over-exposed pop-tartlets, spun in his chair one full revolution and stood up with a slight wobble. Kelli or Katy laughed a little. He walked to the ranch slider and out onto the balcony, sliding the door shut behind him. One step, then he scissored over the railing one leg at a time — the way Big Sexy Kevin Nash used to enter a wrestling ring — and was on the edge of the balcony. It was narrower than he’d thought. Two inches? What’s an inch? He could only fit his toes or half a heel on the edge. He faced the house first, so his toes were on the edge, his heels hanging free, but this hurt so he turned and faced the trees and the river, two hundred metres away, but hidden and silent. Perhaps that wasn’t so telling. You can never hear the Manawatu River, even when you are in it. He remembered being told in school how Manawatu is supposed to mean ‘still heart’.

How a chief was being chased and he came to the river and it made his heart stop.

There is something peaceful about it. Innocuous. I can’t believe I nearly drowned in it.

This thought was not accompanied by an image. It had become a sense rather than a memory.

I have broken bones.

I have been extremely sad.

Glen leant forward, his hands holding the rail behind him, less and less of his heels on the narrow edge. He looked at the strip of garden nestled against the house. A bush with small pink flowers like roses, but can roses be so — bushy? Can I clear it? Is the ground too hard to jump? Too soft? I might leave a big dent. Is Warren’s car too close?

Leaning out from the balcony, he sized up the jump. It’s only one storey. It’s nothing. I’m going to jump. Young Heart, Easy Living, the slogan for the Manawatu region. Is there anything easy about living with a young heart, always thirsting for something else, something hidden like the river I want to be immersed in right now but I’m still on the balcony? Still sizing it up. Once I jump, what then? Walk back into the house like nothing happened. Katey or Kelley will think I’m damaged. What if I break a leg? I have to leave tomorrow. Go back home. Is Melbourne home or is this home? This is my auntie’s new house and I’ve never been here before and I’m gonna jump off her piddling little balcony and walk away like nothing’s happened. I’m gonna jump and slip over and get trapped under the front wheel of Warren’s Escort and him and Kelz or Kat will have to take a hand each and pull . . .

He turned around, toes on the edge, heels — the muscles above the heel — resting. He looked through the ranch slider. Warren had his arm around his girlfriend. They weren’t even looking at him. The sun was about to set and inside it was gloomy — the TV was starting to flicker on their faces but their expressions did not change with the colours. Their expressions should change with the colours. I’m going to jump off this balcony and they are going to look up in the ads and wonder: Where did he go?

He turned away from the house quickly and nearly slipped off, but didn’t, steadied himself to jump, but didn’t, and turned around again. He didn’t look through the ranch slider in case they were looking at him spinning around and maybe laughing at the weird older brother. He looked at the sky — like wet cement. He imagined being on top of the State Insurance Building — maybe the Farmers’ Mutual Building is taller? But the State is so much cooler to jump off, it has proper ledges.

He summoned the appropriate wind for that height. Thirty storeys? No idea.

He kept his eyes to the dumb grey sky and felt his way around to face the river once more — heels on the edge, toes and arches with nothing below — and jumped off the State Insurance Building and landed on his auntie’s lawn and his knees hit his chest and his bum hit the ground but he was okay and standing and breathing real New Zealand breaths two steps away from the moderate impressions his feet left when they hit the ground and didn’t really sink and didn’t slip at all. He patted the Escort he didn’t get trapped under and ran his hand through the pink flowers which he had avoided and which probably were miniature roses.

He heard the ranch slider open. Warren leant over the balcony, perplexed but smiling.

‘Did you just jump off?’

Glen was enjoying his big New Zealand breaths. He nodded and lifted his shoulders and invisible strings pulled his elbows with them, like wings.

‘You shook the whole house,’ his brother said, still smiling. Katy hadn’t come out. Glen smiled back at Warren and turned his prolonged shoulder lift into a shrug.

‘My bum hit the ground but I stayed on my feet.’

Whether it was the jump itself or having jumped, something had turned on a great light in the grey sky and the river was making roaring sounds like a hydroslide and the still heart was flooded with blood again.

Craig’s most recent novel is The Mannequin Makers.