Silvio Bruinsma could never have imagined the path he had stepped onto when he convinced his wife to adopt a cheeky and playful Turkish angora kitten. Mittens’ penchant for exploring soon emerged, and Silvio realised that being his guardian would be more adventurous than expected.

When the Bruinsmas moved to a home on The Terrace in Central Wellington, Mittens’ habitual wanderings suddenly gained a high profile as the friendly, ever-curious cat strode into homes, apartments, office buildings and stores, smooching up to numerous passersby in the CBD.

A fellow pet-lover who worked at the local SPCA set up a Facebook page, ‘The Wondrous Adventures of Mittens’, so that people who met him would know he was a cared-for family cat and have any of their concerns allayed, as well as offering Mittens fans a space to share selfies and stories with the community. This Facebook page now has more than 67,000 members from all around New Zealand and the globe.

Silvio, an accountant with a special interest in working with not-for-profit organisations, is now using his skills to ensure that Mittens' immense popularity is giving back to the community that loves him. He’s collaborated with the Museum of Wellington on a ‘Floofy and Famous’ exhibition of Mittens fan art produced during New Zealand's pandemic lockdown in 2020. Proceeds from Mittens merchandise has raised funds for the local SPCA’s new kitten enrichment facility, while funds from Mittens' number-one hit song are donated to New Zealand’s Mental Health Foundation. Silvio has produced The Adventures of Mittens for fans and cat-lovers of all ages.

Reflecting on the amazing rise to fame of his family pet, and the wild ride the family has been taken on as a result, Silvio says Mittens has showed him the vital role that animals can play in people’s mental health.

Besides acting as Mittens’ talent agent and gig manager, and fielding calls from all over the world for interviews, Silvio is a partner at Deloitte NZ and, with his wife Sarah, parents a son and daughter, Roelf and Lillian. 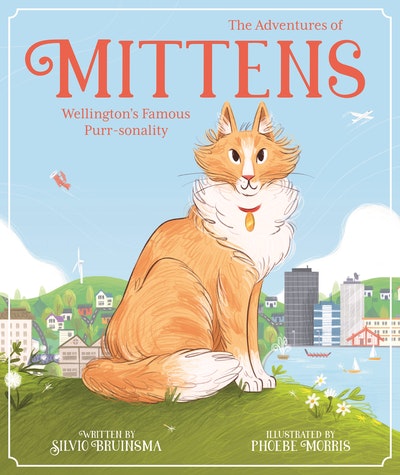 Meet Mittens, Wellington's world-famous cat-about-town. He has thousands of followers, a hit song, an exhibition of fan art, and with his exploring paws he brings joy to everyone he meets!