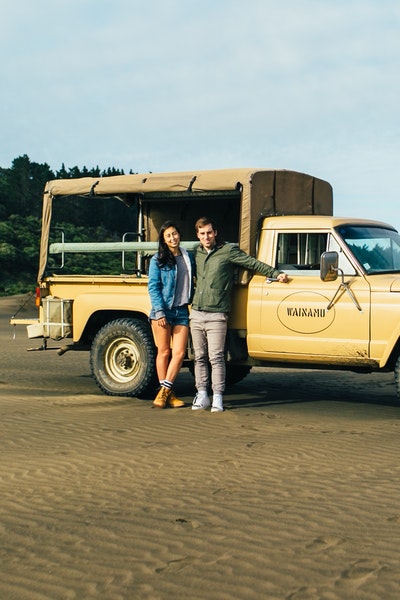 Many people know the Manawatu– Wanganui region only as a flat, green slice of provincial quietness that you drive through on the way from Wellington to the Central Plateau.

What population there is seems to be scattered across fertile plains beribboned with rivers. Some city folk might turn their nose up at the agricultural sleepiness of the area, but this is what makes it the perfect place to hide away.

Driving down country roads, we pass cows lined up at dairy sheds and paddocks full of sheep. The place we are visiting is only a few kilometres off State Highway 1, but soon after we turn off the main road, the sound of cars and trucks has drifted off into the distance.

Slowing down to take note of the mailbox numbers, we spot the driveway we looking for. Pulling through the post-and-rail entrance to the drive, we make our way up past mature trees and rambling gardens, before arriving at the main house. A knock on the door is answered by Keith, who promptly offers us coffee and home-baked afghan biscuits.

Keith and Jen have lived here for about 10 years now, but Keith’s family have always lived down the road on a dairy farm. We are here to visit Keith’s ‘Tiny House’. The tiny house movement has gained momentum internationally over the past few years, and this philosophy, which celebrates the small but perfectly formed, inspired Keith to build his own micro mansion.

The hut structure was known as the pump house, and it would have serviced both the old woolshed and the property’s original house, which was built during the 1870s.

The pump house was in a state of disrepair, but Keith lovingly restored it over the course of a year, using mostly salvaged materials. ‘I really wanted to build a tiny house but I didn’t have the money to throw at it, so instead of spending money to save time, I actually spent time to save money. That’s basically why it took a year of my spare time,’ he tells me.

The Tiny House was originally designed to sit in the garden. One catalyst for the project was Jen, who, Keith tells us, lovingly told him: ‘Keith, you’ve got a lot of shit in the house here. Why don’t you just take it out and make a shed?’ And so the Tiny House project was begun.

At first the hut sat on telephone poles in the garden, and was destined to be Keith’s retreat and office. Then one day Keith’s brother suggested lifting it onto an old hay trailer that was sitting among unused machinery at the family farm. Keith wasn’t convinced: ‘I thought it’d never work. But I pulled the trailer out of the dump and restored it, then we lifted the house up a metre and put it on wheels, hooked the tractor on it, and towed it up there.’

And up there is where the tiny house now sits — on top of a grassy knoll on the edge of a paddock, basking in the sunshine. It’s not until we are within a few metres that we get a true sense of the building’s scale. It’s like a doll’s house. Each detail is perfectly executed — just very small. Despite its size (or maybe because of it) I feel as though everything I could ever need is here.

A kitchen and bathroom are tucked away under the loft bedroom, and there’s room to relax around the  miniature potbelly stove.

It’s amazing how resourceful Keith has been with what was available to him. For
example, the bottom of the shower is made from an old suitcase. ‘One advantage of it taking a long time is I could sort of jig things as I went,’ he says. ‘There were no 3D drawings, CAD or anything like that. It was
just done on the back of an envelope.’

The hut isn’t cluttered, but it is home to Keith’s little treasures, including a map of Taupo on the wall. Keith tells us Jen always wanted a place up at Lake Taupo, so, just for her, he hung the map on the wall underneath
a placard that reads ‘Taupo House’.

We get a pleasant surprise when the oldschool Ericsson wall phone rings. It’s hooked up to a phone in the laundry of the main house — the perfect way to deliver an invite to a dinner of bacon and egg pie, if we’re hungry. We spend the afternoon swinging in a hammock in the sun, napping, reading books and drinking icy cold gin and tonics. The cows in the paddock next door look at us with curiosity for a short while, before
carrying on their business of chewing cud. I can hear the stream bubble and trickle below the tree-covered river terraces.

A golden light is cast across the porch of the little house, highlighting its compact shape
and the waves of its corrugated iron roof. There’s definitely a laid-back mellowness about the countryside, and this colonialstyle tiny house is right at home here.

At night, nestled in the loft bed, we can see the stars through a little window above us. There’s something quite comforting about this tiny house. It’s a safe cocoon, reminiscent of the feeling of building your own fort out of cushions and sheets as a child. I can’t help but feel that it’s that same spirit of childlike imagination and joy that’s brought this tiny house to life. 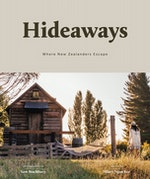 A stunning showcase of tucked-away escape spots all over New Zealand, and a tribute to a simpler way of life.