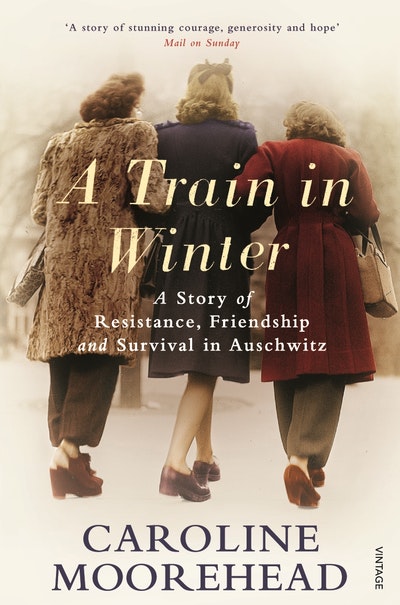 A Train in Winter

A Story of Resistance, Friendship and Survival in Auschwitz

A moving and extraordinary book about courage and survival, friendship and endurance - a portrait of ordinary women who faced the horror of war together.

A moving and extraordinary book about courage and survival, friendship and endurance - a portrait of ordinary women who faced the horror of the holocaust together.

On an icy morning in Paris in January 1943, a group of 230 French women resisters were rounded up from the Gestapo detention camps and sent on a train to Auschwitz - the only train, in the four years of German occupation, to take women of the resistance to a death camp. Of the group, only 49 survivors would return to France.

Here is the story of these women - told for the first time. A Train in Winter is a portrait of ordinary people, of their bravery and endurance, and of the friendships that kept so many of them alive.

'A story of stunning courage, generosity and hope' Mail on Sunday
'Serious and heartfelt...profound' Sunday Times

Praise for A Train in Winter

A harrowing but also uplifting shared story of friendship, courage and endurance

A harrowing but also uplifting story of shared story of friendship, courage and endurance

A hybrid of history and multiple biography, movingly chronicles the women's ordeal... [it] bears eloquent witness to the moral and material ruin of collaborationist in France

A multiple biography and a detailed anatomy of the nature of friendship... A Train in Winter is a powerful and moving book; its significance is in bringing to a wider, non-French readership the particular and terrible fate of a group of women whose only crime was to love their country and to wish to do something to defend it, at a time when its government chose craven obedience to the occupier, with terrible consequences for so many of its people

A pitch-perfect study of human depravity, and of the heroism it can inspire

A remarkable and deeply affecting book

A story of stunning courage, generosity and hope. They risked their lives to defeat Fascism, by printing subversive literature, hiding Jewish friends or, in the case of one girl, simply insulting a French youth because he had decided to co-operate with the Nazis. The price they paid for their bravery was terrible. A Train in Winter could have been a sad, almost morbid book. In Moorehead's expert hands it is a triumphant one

An outstanding and important book, compelling and deeply troubling

Compassionate, meticulous and compulsively enthralling... This book is essential reading. The litany of names at the end, with their brief biographies (Yolande, Cecile, Poupette, Mitzy, Lucie...) reminds us weeping is not enough. It bears witness - and warns

This is a clear-sighted, distressing and unforgettable book

This serious and heartfelt book does deliver on its promise of a tale of how female friendship "can make the difference between living and dying"... Profound