I had no inkling of how far my rally career would take me when I was a kid. I knew about aiming high back then though. When the teachers at school would ask what I wanted to be, I’d answer: ‘I want to be a World Rally Champion.’

Back in 1999, at my intermediate school — Grantlea Downs School in Timaru — they filmed us all talking about where we’d be in 10 years’ time, with the resulting video being put in a time capsule to be opened at the school’s fiftieth jubilee celebrations.

‘Sorry, I won’t be here to celebrate the jubilee with you. I’ll be in the UK — rallying,’ was my response. Fast forward to 2009, and sure enough, I missed the school celebrations and capsule reveal for that very reason.

Back then, nine out of 10 people would give me that ‘yeah right!’ look when I told them about my World Rally Championship (WRC) dream. It never fazed me. It never steered me away from telling anyone and everyone about my ultimate goal. Driving in the WRC was all my mind was ever set on and, throughout my teenage years, it was maybe the only thing that kept me alive.

At the time, the idea of a kid from the small town of Geraldine (population 3000), South Canterbury, New Zealand, becoming a World Rally Champion was the equivalent of that same kid becoming a NASA astronaut. Why so hard?

The World Rally Championship is the big time. Recognised as the most challenging and demanding form of motorsport in the world, it’s a big- bucks, global series of up to 14 rounds annually. It boasts a massive international television audience — as big as baseball, basketball and golf, bigger than rugby in New Zealand. The WRC events are beamed out on hundreds of different TV channels to hundreds of millions of viewers, all of whom are fanatically watching the A- type drivers and their co- drivers compete.

Getting to the uppermost level of rallying had very rarely been done by any driver from the southern hemisphere. The only other Kiwi that had got close was Pukekohe’s Possum Bourne. He’d started to make inroads at WRC level just before his untimely death in 2003 at the age of 47.

Then there’s the logistics and money involved. The amount of each of those required to even make it into the WRC would make your eyes water. Never mind what it would take to beat the other 10 WRC drivers who want that title just as badly as you.

Names are important too. It seems that if your name is Sébastien you’d have a better chance — two drivers who share that name have monopolised the WRC winner’s trophy since 2004.

Then finish with the fact that the championship is predomi-nantly European- controlled and dominated. The majority of the WRC locations are also Europe- based — Australia is as close as the championship comes to New Zealand these days.

Taking all these factors into account, I was basically the equivalent of a local Finland rugby club saying they wanted to win the Rugby World Cup!

If I’d told people I wanted to be an All Black, everyone would have patted me on the back — that goal was at least realistic in this country. Instead, I was pretty much that rugby club in Finland, striving for something that, on paper, seemed completely unobtainable.

From a young age, I always tried to push the limits. Even when I won a race, it wasn’t good enough for me. If I won by a minute, I wanted to win by two minutes. It was about the pursuit of being perfect. In rallying that’s almost impossible. In life, too.

That pursuit for perfection, and a burning desire to push forwards, is what I live for. It is what drew me to a sport that never has two corners the same, a sport that has offered me an incredible adventure, which has taken me to all four corners of the globe. I’ve experienced cultures, eaten food and met people around the world that a kid from small- town New Zealand couldn’t even begin to imagine.

From the outside looking in, people have often commented on how cool my life as a manufacturer- contracted WRC driver looked, how lucky I was, and sometimes, how easy it must have been for me to get there. In reality, it was anything but easy.

It involved massive sacrifices, but I never saw these things as a sacrifice. Rally was ingrained in me, and this was just what I had to do to turn my passion into a job and, ultimately, my life.

Striving towards achieving my ambition took an unquanti-fiable amount of hard work and sustained belief in beating the odds. I never had it easy and my life certainly wasn’t perfect. There are many things that I’m not proud of from my earlier years — although that adversity has helped shape me into the person I am today. Throughout my life, I’ve had to deal with some harsh realities, and my ‘keep to myself’ personality probably didn’t make those struggles any easier.

A major misconception in motorsport is that you can only make it if you have a rich family. Certainly, for a lot of drivers around the world that’s true, but not so for my family. My dad Chris has played a huge role in my life — not only as my biggest supporter, but also my business partner and the man who always had my back — and together, we have worked hard for every cent. Over the years, we amassed more than 154 different sponsors and 58 shareholders, gained three scholarships and hosted four fundraising dinners, along with many other events.

While putting this book together, I couldn’t help appreciating not just how far we have come but also what we had to overcome. Yes, I know, I refer to ‘we’ a lot! My story is, and always has been, about more than just me. Without the massive support crew of family, friends, team members, sponsors, shareholders, fans and media, my road to the WRC would never have been travelled. To all of you, I will be forever grateful.

My story covers a 20- year fight to get to the WRC. Along that road, I achieved more than any other driver from the southern hemisphere and, in fact, more than any non- European in the world of rallying, and I did something most people told me wasn’t possible — and for that alone I can be proud.

Motorsport is a fickle beast, though, and the ever- changing wheel of fortune can elevate you to the top of the world one day, then roll you into a ditch the next. So yeah, there’s a lot of lows too.

The public barely scratch the surface when it comes to what they know about what has really gone on in my life, so here’s the other 95 per cent of what it took to get me to the pinnacle of world rallying. 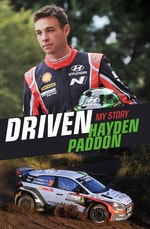