Is the Moon Upside Down?

A Quicke Guide to the Cosmos

Prepare to feel more in awe of the universe than ever before.

Australia's 'Space Gandalf' answers all the questions you never knew you wanted to ask about the night sky.

During his younger days working as a bush mechanic and pearl diver in remote WA, Greg Quicke spent countless nights lying in a swag and staring at the stars. That daily distraction grew into a passion that has seen him become one of Australia's best known and most engaging astronomers.

In recent years Greg – aka 'Space Gandalf' – has taken on cult status among audiences via his appearances alongside Professor Brian Cox in the hit TV series Stargazing Live. Greg's practical explanations of the complexities of space have also earned him respect from astronomers around the world.
Is The Moon Upside Down? is an absorbing guided tour of the cosmos as seen through Greg's eyes. Unlike many of his peers who studied at university he offers a unique and refreshing perspective on astronomy that was instead forged on cliff tops outside Alice Springs, in the endless expanse of the Great Sandy Desert, on the floor of the Indian Ocean and in his own front yard in Broome.

No matter what mysteries you've pondered about Earth's astral dance with the Sun, planets, Moon and the stars, it's guaranteed Greg has thought about them too, and the answers can be found in the pages of this book.

Outback astronomer Greg Quicke grew up in Southern Western Australia. After working on cattle stations and sleeping outside in a swag, he became fascinated with the stars and planets. Greg bought a book on astronomy, then saved up for his first second-hand telescope.
Now he runs astronomy tours from Broome and goes by the nickname 'Space Gandalf’.
After appearing on the ABC’s Stargazing Live he became an overnight celebrity. He also starred in A Stargazer’s Guide to the Cosmos in which he took viewers on the ultimate guided tour of the southern sky, revealing unseen connections between the everyday world around us and the stars above. 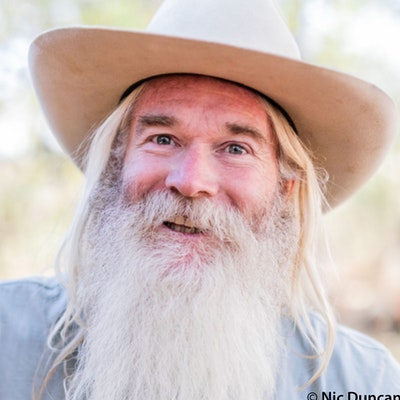