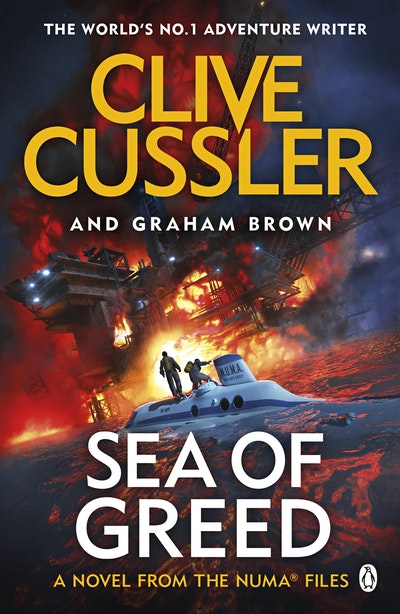 The new Kurt Austin adventure in the NUMA Files series from UK No. 1 bestseller Clive Cussler.

The world's oil supply is vanishing, the stock market is plummeting, and the key to saving the future seems to be a baffling historical mystery. Can the NUMA crew crack it in time? Sea of Greed is the suspenseful new NUMA Files novel from the #1 New York Times-bestselling grand master of adventure.

After an explosion in the Gulf of Mexico destroys three oil rigs trying to revive a dying field, Kurt Austin and the NUMA Special Projects Team are tapped by the President of the United States to find out what's gone wrong. The trail leads them to a brilliant billionaire in the alternative energy field. Her goal is the end of the oil age; her company has spent billions developing the worlds' most advanced fuel-cell systems. But is she an environmental hero...or a rogue genetic engineer?

The NUMA crew discovers that the oil fields are infected with a bacteria that is consuming the oil before it can be pumped out of the earth-a bacteria originally lost decades ago when two submarines vanished in the Mediterranean.

With hired killers on his trail, can Kurt Austin locate a submarine that's remained hidden for more than fifty years? And even if he can, can the biological terror that's been unleashed be stopped?

'Just about the best in the business' - New York Post

Clive Cussler was the author and co-author of a great number of international bestsellers, including the famous Dirk Pitt® adventures, such as Celtic Empire; the NUMA® Files adventures, most recently Fast Ice; the Oregon Files, such as Marauder; the Isaac Bell historical thrillers, which began with The Chase; and the recent Fargo Adventures, which lastly included Wrath of Poseidon. Cussler died in 2020.

Praise for Sea of Greed

'Sea of Greed will have readers turning pages. With a wonderful cast of characters and relentless action, this is classic Cussler'